“I’m going to tell you a story, but I’ll be honest. It doesn’t have a happy ending.” – Narrator

[Spoiler Alert]! The newest and fourth season of Netflix’s original crime drama “Narcos” is actually a prequel to the 1st three seasons, set in the early 1980s and the action has shifted to Mexico. They also brought in some pretty well known talent for the primary antagonist vs protagonist. Diego Luna (the guy from Rogue One) is the bad guy Miguel Ángel Félix Gallardo, and Michael Pena (the guy from Ant-Man) is Kiki Camarena, the good guy. Kiki’s fate in real life is mentioned in detail in the third episode of Season one. He was abducted, tortured, and murdered by the Mexican drug cartel and the local corrupt police helped them do it. In the late 1980s through the early 90s DARE program, they used to guilt trip us by saying that if we smoked weed we were partially to blame for the death of Kiki Camarena. 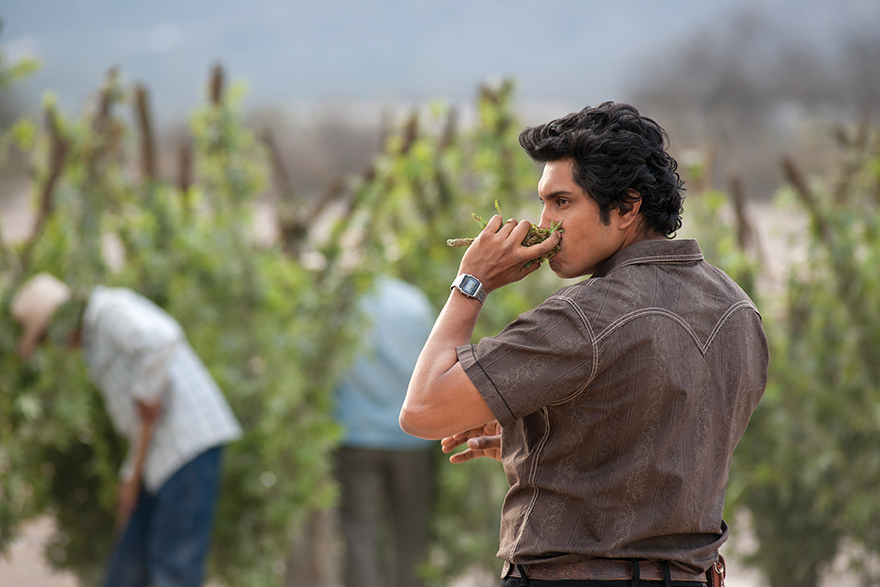 Gallardo’s main man in the story is Rafael Caro-Quintero, known as “Rafa” and played by Tenoch Huerta Mejía, who proves his worth to the drug trafficking organization by pioneering a new form of seedless cannabis called “sinsemilla.” He didn’t actually come up with sinsemilla first, but he did take the new version of cannabis to a much higher level, so Rafa played a key role in the rise of sinsemilla within the Guadalajara Cartel, giving that drug trafficking organization an early and important boost. He’s basically the Manny Ribera to Luna’s Gallardo’s “Scarface”, which is semi ironic because the Cartel gangsters all start dressing more like Tony Montoya after watching the 1983 film. Steven Bauer, who played Manny in Scarface went on to play Kiki Camarena in the 1990 NBC mini series “Drug Wars: The Camarena Story”, where Rafa was played by a young Benicio Del Toro. Bauer and Del Toro would work together again covering similar material but switching sides of the law in Steven Soderbergh’s 2000 film “Traffic”. Del Toro played Pablo Escobar in “Escobar: Paradise Lost” in 2014 and Bauer started playing Don Eladio Vuente in the “Breaking Bad/Better Call Saul” television universe in 2011. Traffic was also a TV series in 2003, and featured Maori actor Cliff Curtis, who played Pablo Escobar in the 2001 movie “Blow” with Johnny Depp. So it seems like a lot of these same actors have been covering this material since 1983. Johnny Depp was undercover on 21 Jump Street busting kids for coke and weed less than 2 years after Camarena’s death, which happened less than a year after Miami Vice first aired on NBC. The relationship between drug cartels and the entertainment industry has been a symbiotic relationship since the beginning, sometimes going tragically wrong. Carlos Muñoz Portal, a location manager who was working for the Netflix series Narcos was killed while searching for places to film in Mexico for the fourth/current season.

Rafa is still alive and currently on the run and in hiding with a twenty million dollar bounty being offered by the US Government for his capture after he was temporarily freed on a technicality in 2013 when he had served 28 years on a 40 year sentence for his involvement in the murder of Camarena. It was Rafa’s super seedless pot plantation that Kiki was responsible for destroying and ultimately it cost him his life despite the fact that by the time they found it the Cartel and the government had shifted their energy and attention to the cocaine business. A show like Narcos can remind you pretty quickly how far fetched and unrealistic Breaking Bad sometimes gets, even though the amount of violence and death is pretty equal. It’s all in the details.

It’s strange now to look back at the life and death stakes the American government was willing to devote towards fighting the drug war even when the drug war was mostly weed. Coke and crack came fast on the back of 1980s cannabis consumption as far as what was being busted, trafficked, and detailed in the media. It used to be normal for the Army in Mexico to kill people while they were burning their fields. Unfortunately, in some places all around the world people are still dying, killing, being tortured and serving life sentences for cannabis. Currently in Indonesia, the deadly police brutality combined with some of the world’s harshest cannabis laws paints a rather familiar and disturbing picture. When you’re privileged enough to be used to buying edibles, pre-rolls and shatter legally at dispensaries run by friendly people, it all seems pretty barbaric and ancient but it still happens and that’s a true tragedy.

In the 5th episode of Narcos: Mexico, Wagner Moura returns as Pablo Escobar and says something prophetic, “Marijuana is a soft product. It doesn’t hurt anyone. For now, it’s illegal, but in the long run, it will be legalized.” He was totally right about that. Let’s all just hope it continues moving forward and stories like that of Kiki Camarena never happen again.