Although the voters of Washington state legalized the recreational use and sale of marijuana in last year’s election, the ‘gold rush’ (or should we say ‘green rush?’) of anticipated weed profits looked to be anything but a rush for companies looking for a legal, safe place to stash their cash. No more. As the state’s Liquor Control Board has started collecting fees from applicants seeking to obtain licenses to grow or sell marijuana, one of the world’s largest banks has stepped up and announced it has no problems accepting deposits resulting from the sale of legal weed.

The Olympian recently reported that state Treasurer Jim McIntire, who had been shopping around for a bank up to the herculean task, ultimately turned to Bank of America, which already handles the state’s accounts. “Bank of America is fine with that,” McIntire said of the marijuana business. “They assure us that’s not a problem for them.” But what about the feds? After all, despite recreational legalization in Washington and Colorado, marijuana remains listed as a Schedule I controlled substance. It’s considered by the federal government to be as dangerous as heroin, LSD and ecstasy, and (if you can believe it) even more so than crack or methamphetamine. Any financial institutions that get involved in the weed biz open themselves up to the wrath of a Justice Department that has proved all too willing and eager to target state-legal medical marijuana. 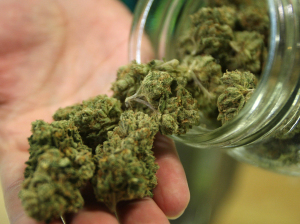 The specter of federal drug money laundering charges looms large over any financial institution that dares foray into the world of weed. That’s where having Bank of America handle the state’s finances should come in handy, McIntire says. “I’m not too worried about it,” McIntire told the Olympian. “It’s actually one of the advantages of having Bank of America as your contractor. It’s unlikely, I think that the federal government would raid them.” ‘Too Big to Fail or Jail,” it would seem, may also translate to ‘Too Big to Raid.’ “They’re big enough to look out for themselves on this,” McIntire insisted. B of A should be ready to handle tons of cash, literally, since marijuana is largely a cash business. So far, 1,326 applications to grow, produce or sell marijuana have been received by the Liquor Control Board. That number has more than doubled in the past two weeks. And with the national market for legal weed projected to be worth as much as $10 billion a year by 2018, you can bet your last Cheeba Chew that banks big and small will be scrambling for a piece of the action.