The Green Organic Dutchman, headquartered in Mississauga, Ontario, is a cannabis industry company listed on the Toronto Stock Exchange. The initial public offering, completed on May 2, 2018, was the industry’s largest to date, and raised over $115 million CAD. The Green Organic Dutchman makes premium certified organic cannabis grown in rich, Canadian soil to create cannabis that is clean and natural. The Green Organic Dutchman Holdings Ltd. (TGODF) has closed its previously announced short form prospectus offering, on a bought deal basis, including the full exercise of the underwriter’s over-allotment option. A total of 36,800,000 units of the Company at a price per Unit of $0.75 were issued for aggregate gross proceeds of $27.6 million (the “Offering”). The Offering was conducted by Canaccord Genuity Corp. The Company is committed to cultivating a better tomorrow by producing its products responsibly, with less waste and impact on the environment. Its two Canadian facilities are being built to LEED certification standards and its products are sold in recyclable packaging. 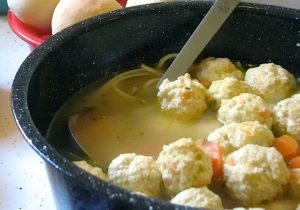 300 grams of ground mixture of beef and pork

Clean the vegetables for the broth, cut into large chunks. Place in a large cooking pot, add the other broth ingredients, and pour over 1 liter cold water. Bring slowly to the boil and simmer for 1 hour. Make the meatballs by mixing all the ingredients and rolling small balls. Bring the broth to a simmer, add the meatballs, vegetables and vermicelli. Stir once, very carefully, to prevent breaking the meatballs. Cook it with the lid partly on the pan until the meatballs start floating.. Add the green herbs, cannabis olive oil and season to taste with salt. Serve immediately, on its own or with some bread.