Most people would think that consuming cannabis would adversely affect an athlete, especially a former professional runner, but Chris Barnicle rejects that theory and states that cannabis actually helped him become a better athlete.

A Massachusetts native, Chris was diagnosed with Crohn’s disease when he was 19 years old, while going to school in Fayetteville, Arkansas. It affected him so adversely it he was hospitalized after his first marathon. His gastrointestinal disorder led him to find his own way of medically controlling his symptoms with cannabis infused peanut butter sandwiches. Being a long distance runner, Chris didn’t like the idea of the carcinogens taken in when smoking cannabis. He says, “there are so many other ways to medicate.” 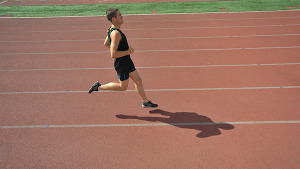 Chris was a three time all American in track and field, while attending undergraduate school at University of Arkansas and graduate school at the University of New Mexico. His specialty was running the 5K and 10K. He then ran professionally post collegiately, and was sponsored by Asics and New Balance, he also qualified for the Olympic trials. His running took him all over Europe and he even traveled to Kenya to train with the world’s best.

Chris and his business partners Micky Corbin and Dan Lacava (also long distance professional runners), had to avoid the standard drug testing procedures for athletes. Chris recalls putting his body through extreme stress, cleaning out and sweating out the remnants of THC in his system from smoking one celebratory joint after his first win. Together they have won 40 national championships as coaches and two while in school.

While many sport authority agencies are lowering their testing threshold for cannabis, Chris believes they shouldn’t even be testing for marijuana. He said, “the fact that cannabis is being scheduled as a street drug with heroin, methamphetamine, and cocaine, when there are many medical benefits to cannabis, I believe this is absurd. This is what really needs to change. There are many former NFL players that are coming out saying that cannabis has helped them with their concussions. That’s a serious problem in the NFL, where you have suicides and violence related to concussions, and if cannabis can be a start to change that, then I think the NFL should be trying to use it, and let their players medicate if they choose. I’d like to see more athletes and people ‘coming out of this closet of cannabis’.”

Chris goes on, “It’s an openness that needs to be accepted. But I think there needs to be people like myself need to come out and say, “Yes, I use cannabis. It is just a flower. And I use it. So what?”

In April 2014, Chris ran his last race. When he got back he found out he had a stress fracture on his tibia, which was his fourth stress fracture. The sport of running had taken him many places, but he didn’t want to risk a fifth stress fracture and put his body through the possibility of permanent damage which could cripple him. He wanted to try something new with his life, and his other passion besides running had always been cannabis.

Instead of going out on a Friday nights to the bars, Chris and his teammates would have an edible in the evening, using it as a way to replenish their bodies from running 100 miles per week. When practice time came everyone else would show up hung over from the bars and they would be fine.

Chris, Micky and Dan have turned the nostalgia of their competing days into a cannabis energy bar, called Zip Organics. Made from all organic ingredients, infused with gourmet espresso beans and cannabis coconut hash oil. It was designed to be equivalent to a cup of coffee, giving a perky effect, unlike most edibles that a sedative effect. Each bar contains 25 mg of THC per bar, 8 grams of protein, and 250 Calories per bar. Chris says it’s great for yoga, and lifting weights, running or hiking. The Zip bars are available in two flavors, Sweet Potato Date and Pumpkin Cherry. “Having just a couple bites, I feel like I’m able to get a little more zip into my work out,” which is where the name came from.

During his track days he was in the closet about his cannabis use, to avoid losing his scholarship. But to those that say “Oh, you’re an athlete, you can’t use cannabis,” Chris rebuttals with, “No, it’s an herb.”

He has always been a supporter of cannabis, and Chris was quick to add that he had his mothers support, and she influenced him with making edibles when he was in high school. Never letting cannabis slow him down, Chris feels like it has always helped rejuvenate his body, in addition to helping with his lack of hunger being an athlete.

On his journey of connecting fitness with cannabis, Chris believes that the next step of legalization, is dispelling the labels of stoners and potheads. “People from all walks of life use cannabis.” 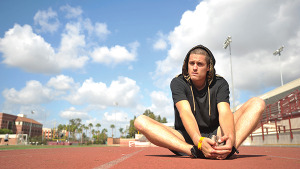