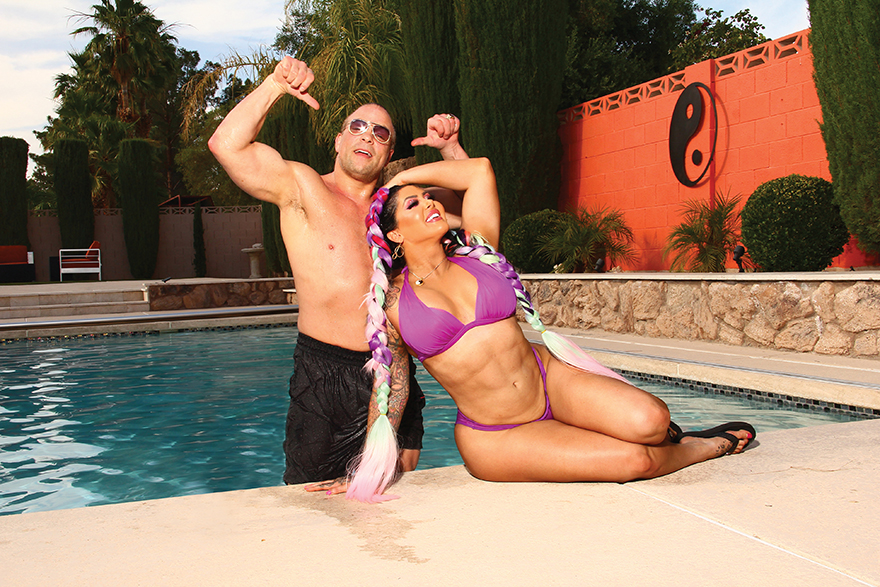 Professional wrestler Rob Van Dam, also known as RVD and “The Whole Fucking Show”,  is having quite a year so far. First of all, on April 6th he was inducted into the World Wrestling Entertainment Hall of Fame, where Vince McMahon stood up during the induction ceremony and told him that he changed the style of the business. Van Dam’s violent style of high-flying daredevil acrobatics combined with a genuine martial arts ability, helped innovate an entirely new approach to pro wrestling. Secondly, in May he was featured on the WWE Icons, the lauded docuseries that explores the life stories of sports-entertainment’s greatest legends, streaming on Peacock and the WWE Network. Next he was featured in the Vice Documentary: Rob Van Dam’s Fight to Normalize Marijuana in Wrestling. And now, this Summer he’s launching his own cannabis brand right here in Oklahoma, RVD  THC.

After the Vice program, World Wrestling Entertainment stopped testing the talent for cannabis and it had everything to do with RVD. As he said when we talked, “We’re moving in the right direction and it’s taken people like me to bring respectability to it in the industry. The WWE has now stopped testing wrestlers for marijuana and that’s progress, I’m proud to be part of that.”

For the last couple of years, Rob has had a successful CBD company, RVD CBD, with a line of menthol pain creams and high dose MCT oil tinctures. Now he’s doing THC products for the Oklahoma Medical Cannabis market, starting with The “Rolling Thunder” Infused Preroll, named after one of his signature moves. While his opponent is down on the mat, he starts on one side of the ring and rolls toward his foe. He then springs to his feet and flips onto his opponent, landing on his back. It’s a very gymnastic move that requires extreme strength, agility and flexibility. The Rolling Thunder Preroll is equally complex, and made by using 1.25 grams of top shelf full flower in an all natural, unbleached hemp paper cone, coating it in full spectrum live resin, and dusting it with high quality kief. The flower used in The Rolling Thunder has an average potency of 25% THC, the concentrate used has an average potency of 75% and the kief is 55%, making the overall potency of the joint just over 50% tetrahydrocannabinol. The whole thing weighs out at 1.75 grams of cannabis product, 1.25 grams of cannabis, 0.25 grams of resin and 0.25 grams of kief. The Rolling Thunder is as strong as RVD himself and provides patients with a powerful high that works on the mind and body. You can read the full review of The Rolling Thunder Preroll on page 29.

The Rolling Thunder Infused Preroll isn’t the only product coming from RVD THC. He has his own moon rocks coming soon named after another of his signature moves, “The Split Legged Moonsault”. The Moonsault truly showcases RVD’s athleticism and flexibility. To perform it, he leaps over his downed opponent, grabbing onto the top rope. He then lifts himself up and places a leg on either side of the top turnbuckle and using that impact, he flips himself and connects with a moonsault, which is generally attempted from the top rope, a wrestler faces away from the supine opponent and executes a backflip landing on the opponent in a splash position but facing towards the elevated position. The Moonsault Moon Rocks have a lot going on as well. Each one weighs in at a whopping 2 grams and are made with top shelf nugs dipped into cannabis oil and rolled in a dusty kief that makes them sparkle if you look closely enough.

The history of RVD is the stuff of legend in the wrestling world. Rob Van Dam was born Robert Alex Szatkowski on December 18, 1970 in Battle Creek Michigan. Growing up, he studied a variety of martial arts, including: Karate, Taekwondo, Kickboxing, Kendo and Aikido. He made his very first appearance on World Wrestling Federation Television in 1987 when he was selected as a plant from the audience and paid $100 to perform a skit where he entered the ring and kissed The Million Dollar Man Ted DiaBase’s foot. After being dubbed Rob Van Dam by Florida wrestling promoter Ron Slinker in 1991, both for his physical resemblance to Jean Claude Van Dam and his martial arts prowess, Rob wrestled in independent Michigan promotions that included the United States Wrestling Association, and South Atlantic Pro Wrestling, where he won his first wrestling championship, The SAPW Tag Team Championship in July 1992. Van Dam signed with World Championship Wrestling in late 1992 and made his debut with the WCW on the January 23rd episode of Saturday Night Wrestling in 1993 and quickly became a fan favorite.

Outside of the wrestling ring, RVD has appeared in multiple films, and on several television shows. He was cast in a seventh season episode of The X-Files titled “Fight Club” alongside comedian and fellow guest star Kathy Griffin, who was playing twins. That same year he was also on V.I.P with Pamela Anderson, and in 2002 he played “The Claw” in Black Mask 2: City of Masks. Just last year he played a soldier named Vasquez in Sniper: Special Ops, also starring Steven Seagal, who served as executive producer. RVD also provided the voice of the character Bobby in the Saints Row series of video games. In addition to wrestling and acting, Rob Van Dam is the creator of the Van Dam Lift, a weight lifting technique that involves performing a split between two benches and lifting a dumbbell from the floor to the waist. The lift was approved by the International All-Around Weightlifting Association in 1998. His lift was also then entered into the rulebooks of the United States All-Round Weightlifting Association. Rob currently holds the record which is 166.5 lbs.

RVD is now married to Katie Forbes, a professional wrestler, model, social media influencer, and a former fitness competitor. Her TV performances include: World Wrestling Entertainment (WWE), Impact Wrestling, Ring of Honor, and Women of Wrestling (WoW), among others. The last time Edibles Magazine profiled Van Dam in 2017, he and Katie were engaged and living in Los Angeles. These days they’ve relocated to Las Vegas where they’re very happy living with their dogs Pea-Tree and Barbie, and will be spending more and more time in Oklahoma now that RVD THC is successfully operating here. Rob will also be hosting cannabis dispensary tours in Las Vegas.

Rob is more than just a casual fan of cannabis and he’s been using it to medicate for a number of injuries and physical ailments throughout the years. Back in July of 2006, Van Dam and fellow wrestler Sabu were arrested on US Route 52 in Hanging Rock, Ohio. RVD was stopped for speeding by an Ohio State Trooper, who discovered that he was in possession of 18 grams of hashish and five Vicodin pills, while Sabu was in possession of drug paraphernalia. Rob and Sabu were released after posting bail, and on August 31st, Van Dam pleaded guilty to possession of hashish and speeding but the charge of Vicodin possession was dropped when proved he had a prescription. He was fined $600 and additional court costs. He was also suspended from the WWE for a full month and lost two championships that cost him thousands of dollars, but he said he was happy for the vacation and requested more time off.

“Now that the WWE has welcomed me back into the family there’s a synergy that is smoother than ever. I gave Vince McMahon some of my RVD rolling papers and it’s no big deal. Those jokes are fine and it’s cool, which is great considering what once happened to my career. It’s good, it’s progressive and I couldn’t be happier.”, Van Dam told us.

Last year, RVD took part in a Headstrong documentary, which looked at his symptoms and difficulties of his ongoing brain injuries due to him dealing with concussions from wrestling. He shocked the doctors involved when he told them he’d suffered from hundreds of concussions throughout his career. A concussion is an injury to the brain that results in temporary loss of normal brain function. Concussions are now taken a lot more seriously in wrestling, which has helped to prolong the wrestling life, as well as overall life happiness, of many wrestlers. Rob’s search for pain relief led him to start RVD CBD and now RVD THC so that he could share the benefits of cannabis with anyone who is suffering.

Rob Van Dam isn’t wrestling as much as he once was but he’s definitely not slowing down. In addition to his cannabis companies he also still makes movies too. This year he featured in Assault on VA-33, an action film described as: “Die Hard but set in a Veterans Hospital”, starring Sean Patrick Flannery from The Boondock Saints and The Young Indiana Jones Chronicles. Rob plays a hulking terrorist named Zero. The movie is available on Amazon. Later this year he’s getting a lifetime achievement award from The Cauliflower Alley Club, a non-profit fraternal organization, which includes a newsletter and website, comprising both retired and active professional wrestlers and boxers in North America.

It’s exciting to be able to tell fans that they’ll be able to medicate with cannabis products made by their favorite professional wrestler. Look for the RVD THC Rolling Thunder Infused Preroll and his other products at your favorite Oklahoma dispensaries and visit Rob’s website at robvandam.com to learn even more about him and you’ll see why he really is “The Whole Fucking Show”.