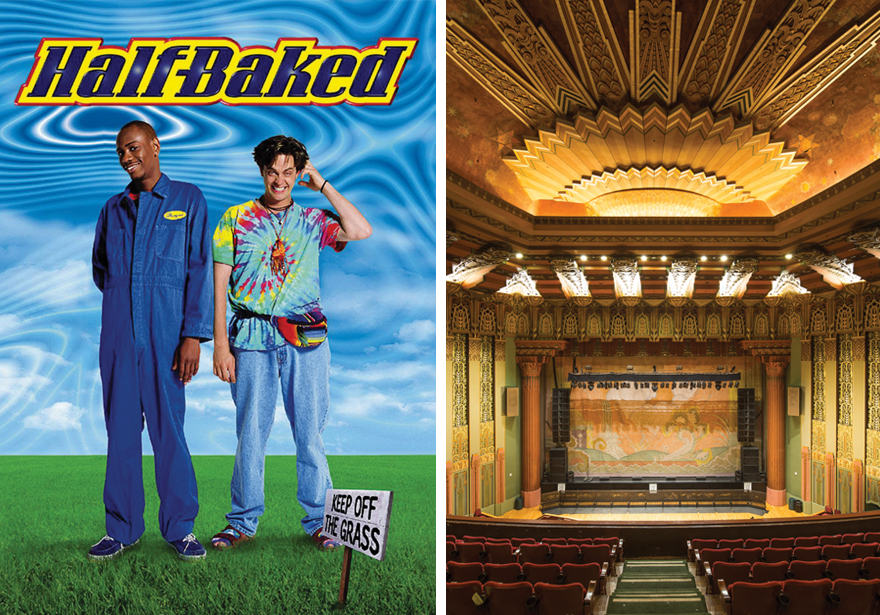 I received 2 free tickets for the show from Natural Herbal, a very nice Pre-ICO dispensary in downtown LA at a very cool 4/20 Patient Appreciation Day they put on. This absolutely seemed like the perfect opportunity to see a cult classic I’d somehow missed for close to twenty years in a meaningful setting. I gave the other ticket to my friend Alex and we spent 30 minutes vaping Sublime brand Sativa Co2 oil in glass tipped cartridges before the movie started and ate multiple bags of 25 mg Heavenly Sweet Caribou Munch the entire time. Very good medicine and it went great with the film. Now, about the film…

It was really surprising to me how well this particular late nineties “weed” movie holds up in 2017. The characters don’t have a website or the internet and never use cell phones but other than that it’s really pretty straight up and on point realistic. Yeah they fly around the city sometimes when they get extra stoned but that’s not really so far fetched. What’s weirdly stranger was seeing music videos and payphones that worked. It actually is more realistic than most anything you’ll see on television or in most movies featuring marijuana smoking scenes, with the exception of “9 to 5”, old Cheech and Chong stuff and pretty much anything involving Seth Rogen. There are exceptionally good cameos by the people you hope to see in this genre: Tommy Chong, Willie Nelson, and Snoop Dogg and some you don’t expect: Jon Stewart, Stephen Baldwin and Bob Saget. The actual business, delivery and distribution seemed totally right for 1998 New York City and also a lot like the operation on “High Maintenance” nowadays. The jargon and nomenclature used were even more authentic than what you’ll likely hear on Workaholics, Broad City or Mary + Jane, and the way they depict “the munchies” is perfect. All of the cast’s performances were awesome and seemed genuine and there are infinitely quotable lines. I’m not going to try and get existential or introspective – it’s Half Baked! If you haven’t seen it yet, go get high and watch it. If you’ve seen it, get high and re-watch it! If you have the chance to see it in the theater on 4/20 next year then do it and don’t forget to take your medicine. Dave Chappelle is back now with new comedy specials on Netflix and it’s great to go back and see how he got started before the brilliant “Chappelle’s Show.” The time seems right for a Half Baked sequel. Call it “Fully Baked” and now Dave can be in 100% control of everything. He sure has that power in this day and age to do it exactly how he wants to and the world seems just right for that particular kind of movie these days. Please use this idea and just invite me to the premiere and I’ll bring the edibles.

After the movie Laura Silverman, who played Jan, took to Twitter and told me her favorite line was “Doctor says I need a backiotomy” by Sir Smoke-A-Lot. I’m inclined to agree with her.