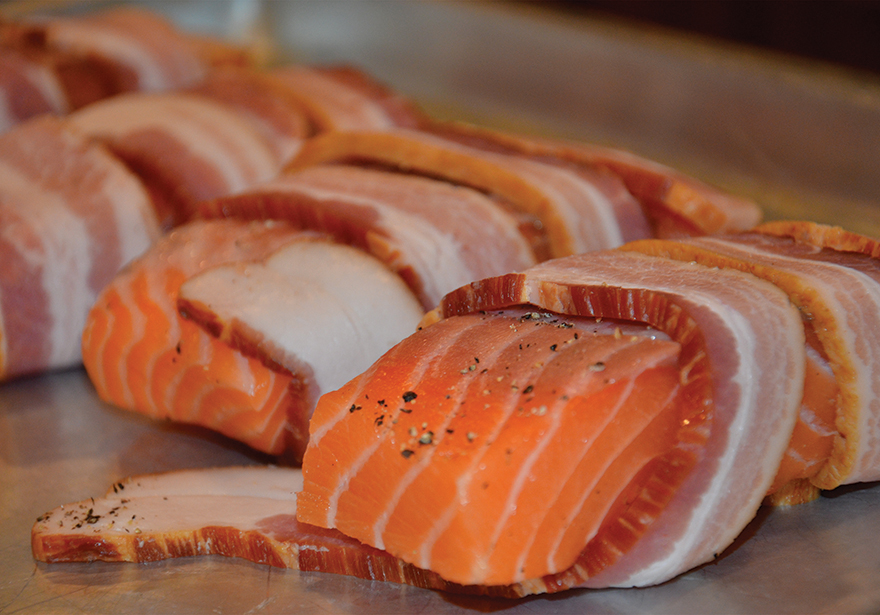 With Valentines Day coming up, you want a classic romantic meal that not only provides great nutrition but may have an affect on the libido. We all know that fish has been known to act as aphrodisiac, at the same time, what guy (or good woman for that matter) doesn’t like bacon! Here’s a twist on a classic dish to add a little red meat to the flare.

Ingredients
4 wild salmon fillets, about 5 oz. each (that’s just under 2 lbs of salmon in total);
2 sprigs tarragon, cut in half;
Zest of 1 lemon;
8 slices of bacon;
2 tbsp. maple syrup or honey; (optional)
3 tbsp. Canna Olive OIl
(We like Chef Nuha or Goodies By Magooch)
Sea Salt and freshly ground pepper

Instructions
Preheat your oven to 375 F. Season the salmon to taste with sea salt and freshly ground black pepper. Top each fillet with a sprig of tarragon and some lemon zest. Wrap each fillet with 2 slices of bacon. Heat some Canna Olive Oil in a large ovenproof skillet over a medium-high heat. Fry the salmon on each side until golden brown (about 2 minutes per side). Brush each fillet with the maple syrup or honey, if using, and transfer to the oven. Place the salmon in the oven until cooked through (about 8 -10 minutes).