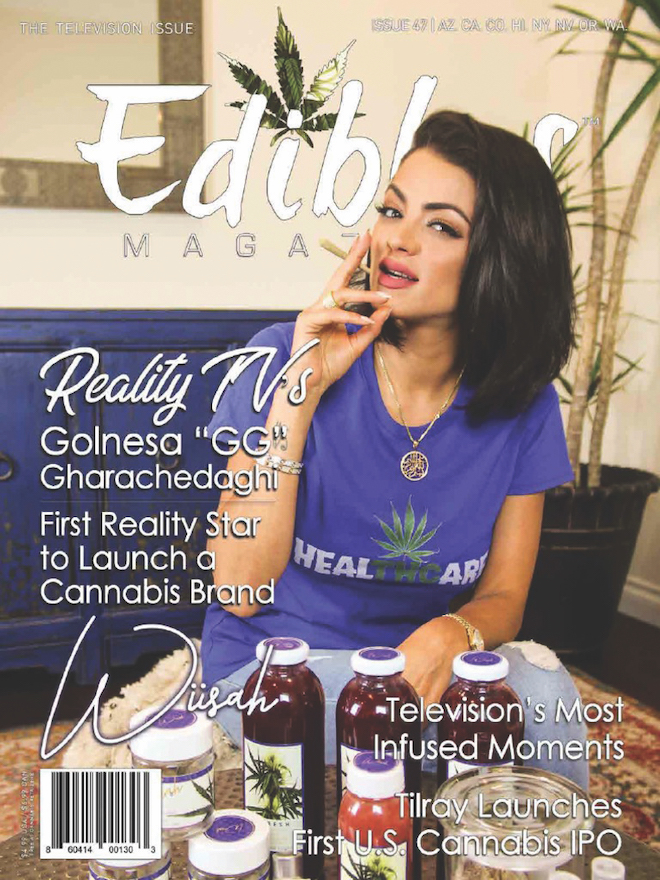 Reality is defined as: the world or the state of things as they actually exist, as opposed to an idealistic or notional idea of them. Reality television is a genre of television programming that documents purportedly unscripted real-life situations, often starring unknown individuals rather than professional actors. There’s been a few good marijuana infused moments in the genre, so here’s the Edibles Magazine list of the Top 7 Cannabis Moments in Reality TV. Enjoy.

In the episode “The Prenup Hiccup, Golnesa “GG” Gharachedaghi throws an official launch party for her cannabis brand WüSah and meets Edibles Magazine.

2. Kim Kardashian Throws a CBD  Baby Shower for Her Fourth Child on KUWTK

There was a CBD bar, where people could make their own CBD-infused bath salts and body oils, a tea station, flower arranging, a group meditation and sound baths.

3. Kris Jenner eats THC Gummies with her Mom on KUWTK

Kris’ mom M.J. is prescribed medical marijuana and convinces Kris to try it with her. They get high and Bruce Jenner, who is now known as Caitlyn, gets angry.

During the See’s Candies “celebrity candy” fundraising challenge on The New Celebrity Apprentice, Ricky Williams get’s a $10,000 donation from WeedMaps.

The Real Housewives of Beverly Hills visit a coffee shop during their trip to Amsterdam and try cannabis infused cake but are concerned that their kids would see them getting stoned.

Marcus visits Canndescent in Desert Hot Springs and appreciates their high-end packaging, but he’s not convinced it’s better than the market’s cheaper alternatives.

7. Cheech and Chong are Reunited on Dancing with the Stars

Cheech Marin and Tommy Chong are reunited for Chong’s performance on Dancing with the Stars. Cheech drives him onstage for his performance in a smoke filled convertible.