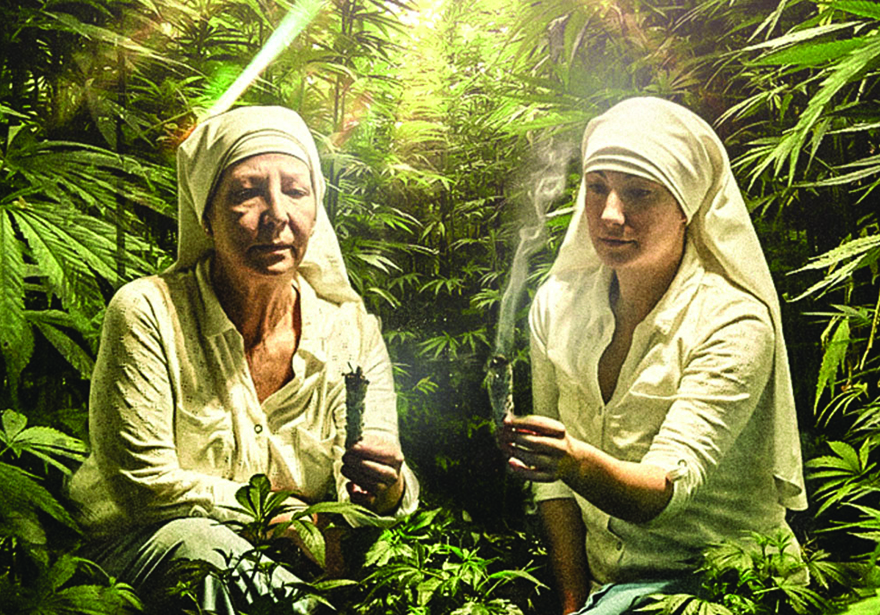 In the new documentary, Breaking Habits, we meet Sister Kate of Sisters Of The Valley: a group of nuns that THANKFULLY aren’t like the Catholic nuns you either grew up with or have seen in films and TV – these ladies roll (pun intended) a bit differently.

Sister Kate’s story goes like this: Cheated by her stealing, polygamist husband of 17 years (who stole at least a million dollars of HER money), a once high-flying corporate executive named Christine Meeusen fled penniless with her three young children as her American dream began to unravel. Determined to make a living for her family, she discovered the lucrative business of cannabis farming and met her calling as founder of medicinal-marijuana empire Sisters of the Valley. Shedding her former life, Christine became Sister Kate; on a mission to provide her products to those in need. Fighting off the county sheriff (who really, REALLY hates marijuana) and protecting her crop from deadly black market thieves, we follow Sister Kate’s journey to becoming the head of a fast growing enterprise, a voice for the unheard–and possibly the most controversial nun in the world. Fascinated by her story, I just HAD to reach out and find out more.

EL: How did you meet director Rob Ryan and much convincing on his end did you need to take part?

SK: Rob reached out to me by telephone or email when word of us first hit the mainstream news. This was shortly after our first year and right about the time we were moving onto the farm. I just agreed to let him come and film a little and discuss with me the potential of a documentary.  At the time, I had many people offering, but Rob was the most credentialed, as I recall. Also, I think I got as far as ‘former BBC documentary filmmaker’ and like most Americans would be, I was impressed.

EL: 50 churches in Merced. WOW. How daily are the discussions like the one you had on the street with that pastor?

SK: Whenever we go out in public, we have to be ready for that.  We have to be ready for people to challenge us. But as it turns out, we get challenged a whole lot less than Catholic nuns do. They had to give up their habits because of public harassment. We aren’t holding up a patriarchy, so we can’t be accused of the same things they are accused of.  We do get someone now and again who wants to tell us we are ‘fake’, but we know those people don’t understand who we are and we make an effort to educate them, but we won’t fight about it.  If people want to hate us, oh well.  People hate on Mother Theresa, so they will hate on anything.  As we get more famous, people are far more likely to ask a Catholic nun if she is a weed-nun than a weed-nun if she is a Catholic nun.  Just saying.

EL: What is your response to those who ask “Why not move somewhere where you and the Sisters CAN get licensed? Why Merced?”

SK: Because we intend to infiltrate farm towns across the planet. Farmers are farmers, I realized when traveling across Europe. Farm-folk in Northern Wisconsin put pink flamingos on their front lawn, so do those in Holland and France. Farm-folk were the last to hear the world isn’t flat and they will be the last to come around about cannabis. Nuns don’t go where it is easy, we go where it is hard; the nuns have never taken the easy route.

EL: Knowing what we know now about the medicinal benefits of both THC and CBD, why is there still such a strong stigma attached to Marijuana?

SK: Long answer? About a hundred years ago, the attack on women was stepped up in a big way.  Outlawing hemp and cannabis is a terrorist act against the people and the planet.  Also, against all that is divine feminine. At the same time, the Catholics decided that abortion was a sin (they decided to control women’s vagina’s in a bigger and worse way than ever before). Attack against the feminine healing medicine for the people, attack against hemp versus plastics for the planet, and attack against women by controlling their vaginas. This is the holy trinity of evil against the people and the planet. The propaganda campaigns were so big, and so multi-generational, that the ignorant, unenlightened, un-challenging, are still steeped in those false beliefs.  They are all an attack on all that is feminine and good.  Short answer:  People are ignorant.

EL: What has been the community’s reaction to the documentary?

The first good press we ever got from local newspapers came after the main reporter saw the film.  I think the film is helping our locals understand where I came from and that I am not trying to take anything away from anyone.  I am fine with people continuing to go to their churches every Sunday if that feeds them.  It doesn’t feed many, that’s why 20,000 churches a year close across the planet and that has been happening for 20 years.  But if someone gets sustenance and nourishment from their traditional churches, we say “go you.”

EL: When it comes to products, why is the FDA taking so long to approve CBD across the board instead of piecemeal?

SK: The FDA is a deeply corrupt institution.  I have a policy against pondering the motives of the corrupt – as well as the insane.

EL: How’s life treating you and the Sisters these days?
SK: We are always under attack in some way.  These days, it’s banking.  As soon as the film previews came out in January, we were not so politely asked to take our banking elsewhere. That started a five-month battle with the bank that we lost. We are now doing all of our banking out of Canada.  Ridiculous, but survival drives us to implement crazy solutions. We set up a company in the U.K. just for the purpose of accepting credit card payments. But life is good and we continue to grow. No one is getting rich (getting rich isn’t the point), but we do enjoy housing security, health care, a spiritual lifestyle, and we take great joy in the growth of the order.

EL: What is the most important thing you’d like audiences to take away from this film?

SK: I didn’t know this when I made the film with Rob, but the most important thing is to give people hope. These are difficult, hopeless times and the churches are failing their people and now, the people know they are being conned by most religions.  They need hope that they can build their own families, build their own careers, and build their own spirituality.  We hope we give hope.  🙂

Breaking Habits is billed as “a story of rebellion, hope and revival,” and I couldn’t agree more. The film, which opened in theatres on April 19, is a pretty interesting one, no matter what side of the medicinal marijuana fence you sit on and will make for some interesting debates amongst you and your friends. I HIGHLY (pun intended) recommend it. Check your local theaters for showtimes and feel free to come back here and leave your own thoughts about the Sisters Of The Valley!