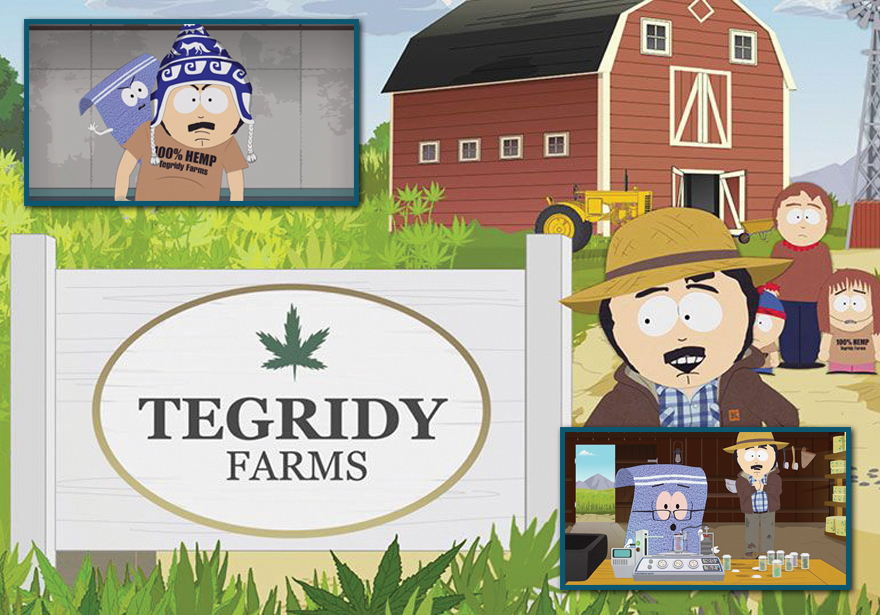 The recent South Park episode, “Tegridy’ Farms” the 4th ep in season 22, is one of the most accurate depictions of the regulated cannabis industry I’ve ever watched on television. I caught the show in a hotel in Utah while there for a conference and it was shown at the end of a block of South Park so I didn’t even realize it was brand new at the time. Having just visited an organic, sungrown cannabis farm run by a small family in Colorado, Pharm Aid Pharms, I was particularly receptive to Stan’s dad Randy Marsh’s new business. After getting fed up with the big city problems of living in the small mountain town of South Park, Randy immediately moves the family to an all natural cannabis and hemp farm deep in the Rocky mountains. ‘Tegridy Farms is what he names it and he quickly gets busy farming hemp and unique and potent strains of cannabis as well as making and wearing hemp clothing and feeding the family hemp cereal with hemp milk and hemp oil and vinegar bruschetta with some hemp-seed tabouli. He creates a special new hemp fiber stocking hat for his son that plays the Spin Doctors whenever you wear it and begins speaking in an accent that sounds like the Pepperidge Farms farmer in addition to singing a song during his farming montage, “On a Colorado Farm”, that pretty much sounds like an homage to “Thank God I’m a Country Boy” – “City folks are fightin’ and I don’t give a darn (darn, darn), Cause I make my living on a Colorado farm”. Randy’s neighbor Joe grows Purple Skunky Kush and Super Hindu Haze while the Marsh family cultivates Green Willy Stranger and Catatonic ‘Tegridy Bud. Towelie even shows back up, now working as a Colorado State Agricultural Inspector and tester, where he uses his unique set of skills to make sure the cannabis produced is pure and safe.

Meanwhile, back on the playground and the other side of the equation, vaping has become a schoolyard epidemic that has even infested the kindergarteners who recommend Gummy Bear Surprise flavored nicotine. Ike Broflovski is even using a vape and his dealer is Butters, who’s partnered with Cartman, of course. It’s hilarious and much more effective at covering the topic than the unfunny and tone deaf ‘Truth’ commercials featuring not endearing puppets that were airing constantly on Comedy Central during the commercial breaks. The Vape Rep from the big vape company visits Randy telling him he’d like to put ‘Tegridy Bud into his product and the issues finally tie together. The Colorado State Health Department praised the FDA’s plan on targeting underage vaping and called it an epidemic. In the cannabis space we’ve seen a number of different vape controversies come up, from propylene glycol and vegetable or coconut oil fillers, popcorn lung, underground butane extraction labs catching fire or blowing up, pesticides getting vaporized in post processing, batteries going on/off in people’s pockets, moisture and vape molecules in the lungs, lipid pneumonia, foreign unsafe terpenes with no allergen warning or information, a general lack of lab-safe testing and some other stuff too. Some people love to vape and I’m a fan myself, as long as it’s safe, clean, tested and organic product made by experts from quality flower. There are only a couple of brands I’ll use unless it’s for a product review or something I’m testing. We still don’t know what the long term effects are of any of the newer technologies but at its simplest, vaping shouldn’t be much different than old school hash oil.

Anyway, Randy sends the vape rep away and the real drama begins. I’ll stop with the spoilers but I do believe this is one of the best episodes of South Park ever made. It’s amazing they have managed to stay so relevant for so long and how they can hit such a bulls-eye lampooning an industry the rest of the entertainment world has failed to successfully highlight in a meaningful, believable or relevant way. I’d recommend watching high and while medicating. Vape if you like but be sure to choose a high quality and safe brand, or enjoy organic flower smoked old school Randy Marsh style. After all, “A man’s got to have his ‘tegridy”.