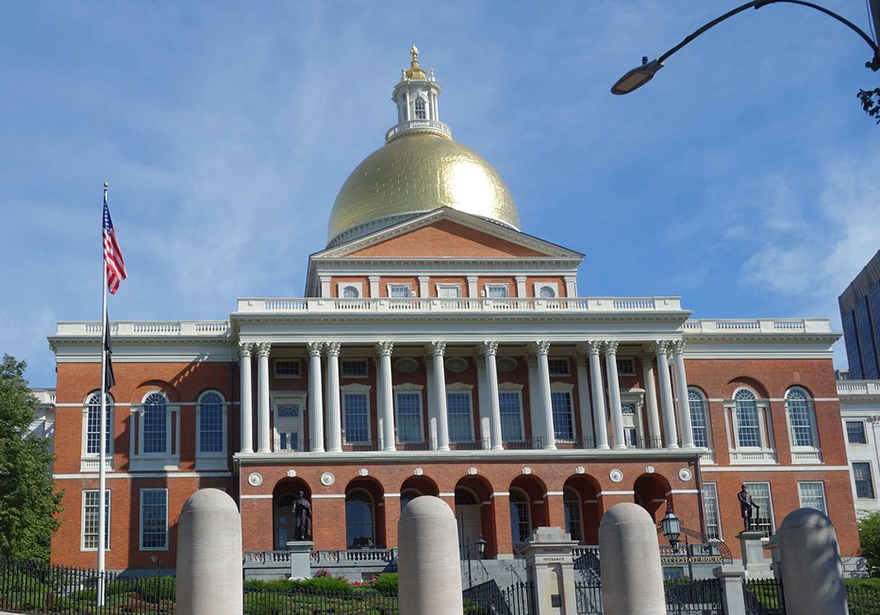 The Massachusetts Legislature’s Joint Committee on Cannabis Policy met in January to hear arguments on two issues: expanding medical access for veterans and banning cannabis related billboards. Veterans from several branches of the military were on hand to speak to the committee members in favor of expanding VA benefits to include medical cannabis. The bill to expand veteran rights was filed by Representative Michael Soter, a Republican from Bellingham. Lawmakers also heard testimony on a separate bill which was filed by Democrat Senator Diana DiZoglio. This bill wants to prevent billboards going up too close to where children are exposed to their message.

Speaking in favor of expanding VA benefits was Iraq Army Veteran, Stephen Mandile, who appeared with his Service Dog. Mandile was injured in 2005 and was prescribed opioids to treat his pain. He unfortunately became addicted and began to withdraw from his family and even attempted suicide.  Representative Soter says the veterans in Massachusetts, according to a Department of Social Health Report, are three times more likely to die of an opioid overdose, which is higher than the National average.

According to militarytimes.com in 2015, VA officials reported they had seen a 55 percent increase in opioid use disorders among veterans following combat operations in Iraq and Afghanistan, and in 2016, the VA treated roughly 68,000 veterans for opioid addiction. Between 2010 and 2016, 6,485 veterans in the VA health care system died of opioid-related causes.

“Cannabis helps me in ways that 57 medications that the Department of VA Affairs had me trying.” Mandile told committee members, “…[Marijuana] helped me achieve healing in my mind, body, and soul.”

Ellen Taylor Brown, an Air Force veteran said veterans were desperate for help with buying cannabis. She said she spent an entire day waiting in line with hundreds of other veterans at a company that offered one-time free medical marijuana certifications. “Everybody says ‘thank you’ to a veteran,” Brown said. “But you, right here, have a once-in-a-lifetime opportunity to directly impact those veterans for the better.”

Shaleen Title, of the Cannabis Control Committee, told the members that the bill made sense and addressed concerns she’d heard from veterans. She cited that a similar system works in Illinois.

Opposed to the bill were medical marijuana participants who argued that access should be expanded for all patients, not just veterans.

Dr. Jordan Tishler, a physician who specializes in cannabis, submitted written testimony arguing that the bill would side-step medical supervision and undermine veterans’ health by eliminating important protections against potential harm and overuse. Tishler wrote, “Any current illness is an ongoing process subject to evolution and development worthy of care and guidance from medical professionals.”

The Committee on Cannabis Control also heard arguments about a bill that was filed by Democrat Senator Diana DiZoglio. She said she filed the bill after hearing that a billboard for Weedmaps was placed above a school bus stop in Haverhill, Massachusetts. According to DiZoglio, the billboard showed a young woman looking for dispensaries on her phone. Current state regulations restrict Cannabis companies from advertising on billboards unless they “reasonably expect” at least 85% of the intended audience is over 21 years old. However, these rules only apply to licensed companies, not to websites like Weedmaps. “The intent of the legislature was there…to make sure children were protected from invasive advertisements,” Senator DiZoglio said.

Hilary King, a cannabis consultant, testified against the ban saying that the current rules are sufficient to protect kids. King says that enacting more restrictions on cannabis and not on other adult businesses like lottery, tobacco, alcohol, and strip clubs is “unjustifiable reefer-madness stigma.” A reference to the paranoia raised by the 1936 propaganda film “Reefer Madness” which raised outrageous claims on the effects of Cannabis.

The Joint Committee on Cannabis Policy did not say when it would vote on the two bills but if approved the measures would go before the House and Senate.