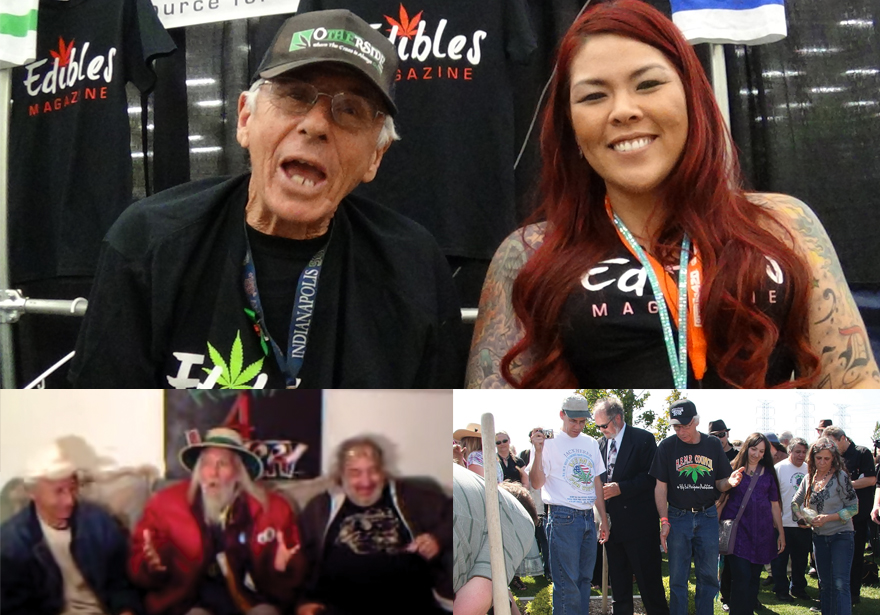 “He was a schmuck – but I loved him,” Richard Marcella says of Jack Herer.

Too often do we take for granted what we have. In our current cannabis marketplace, most of the younger generations don’t know the legal history in how we got to where we are now. All we know is that we have access to medicine and recreational cannabis in some states. Here at The Edibles List, we believe it is imperative to know where you came from, and that is why this issue is dedicated to those that have laid the groundwork before we came along.

Our team was at The BIG Show Denver during 2015’s World Cannabis Week when a lively and gregarious Richard Marcella, chased down a member of the Edibles Magazine Team to show us his pictures he brought with him from California. He held stacks of printed photos of him in front of the White House campaigning, photos of him with Jack Herer, and photos of Jack with his girlfriend at the time.

Jack Herer authored the premier book on cannabis, The Emperor Wears No Clothes, originally released June 1985, it has now sold nearly 1 million copies, and the documentary has done just as well. Richard Marcella was Jack’s friend, confidant, and the official spokesperson of the California Hemp Initiatives.

Richard got involved in the movement to legalize cannabis in January 1980. He joined the National Organization for Reform on Marijuana Laws, and began his road to becoming an official hemp advocate. He was 35 at the time, and is now 70 years old, celebrating 35 years (and dedicating over half his life) in the cannabis movement.

He was his “PR” man. The official hangout was Captain Ed’s head shop in Burbank. It was originally called Heads & High, and opened by Captain Ed Adair, in an effort to keep the spirit of the 60s alive. It is still there, and is the oldest head shop in America, with 48 years under its belt at the Burbank location on Van Nuys Blvd.

In addition to being the official hemp initiative spokesperson and media coordinator, Richard began a public access television show called HEMP 4 Victory, (a throwback name to the 1940’s government campaign “Hemp for Victory,” encouraging farmers to grow hemp for rope supply during the war). Richard was happy to show us some of the episodes that aired on PBS, as well as the impromptu interviews he landed with Willie Nelson, over 20 years ago.

In September 1981, Richard and Jack were all arrested at the Lancaster Fair for gathering signatures for the California hemp initiative for legalization. The official charge was an infraction, not even a misdemeanor, and yet their bail was higher than the prisoners being held for felonies. Jack was bailed out right away, while Richard spent 3 days in jail.

When the Sheriff was booking Marcella, Richard told them, “You’re going to hear from more media than you’ve ever heard from before…. The LA Times, KFWB, ABC, Channel 7…”

The Sheriff got angry and responded, “For 20 years I’ve heard that threat, and for 20 years nothing has ever happened.”

Every media outlet called the Sheriff station, the Governor’s office, the Secretary of State called, the attorney general’s office, all called, wanting to know about the arrests.

“The sheriff got pissed off at me, walked around, put his arm around me and hit me in the kidney. Knocked the wind out of me. Jack was in the holding tank behind, heard it and he yelled, ‘Richie are you alright?!’

In a holding tank in downtown LA, Richard reached out to the impossible to get a hold of, Larry Jacobs, at 95.5 KLOS radio, at that rare moment he was in. Marcella gave an interview with the #1 radio station in LA, from jail.

“So I hang up the phone. Then the phone rings, it’s a black woman, and I hang up on her as she’s asking for the biggest, blackest, meanest guy in the jail. My back was against the wall, and I’m not feeling good, and he walks up to me. I knew I was gunna have to fight to save myself. I’m thinking to myself, okay, we’re in jail, at least I’ll go down fighting. He walks up to me and says, ‘Don’t you EVER hang up on my old lady again or I’ll kill ya!’ and he walks away”

Finally after being in jail for three days, Jack get’s Captain Ed to get Richard out of Jail with $200 out of the head shop cash register.

With California’s Cannabis Hemp Initiative in 2016 going on the bill for voting, we encourage you to remember those that paved the road before us, and those that have served jail time for this plant.