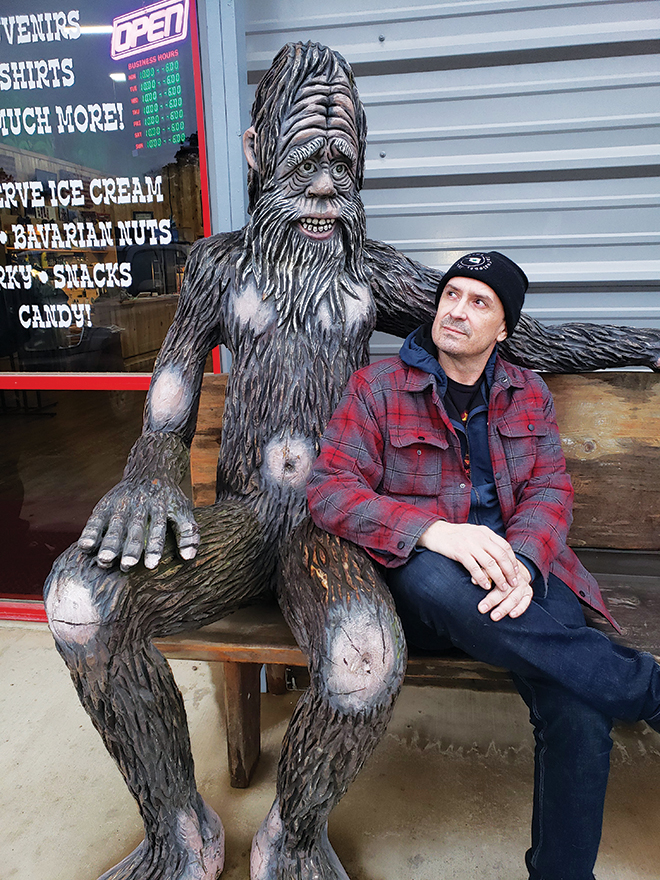 He is known by many names, BigFoot, Sasquatch, Yeti, Skunk Ape, Yowie, Ape Man, and to most Native Americans in the Oklahoma area, he’s known as the Wood Ape.

The American Pacific Northwest, from California to Canada, is Sasquatch country, but not many know that Oklahoma is also a BigFoot hotspot. They say there are more BigFoot sightings per capita in Hochatown than anywhere else in the nation. In 2002 the documentary, “Bigfootville: Hunting Bigfoot in the Mountains of South East Oklahoma” was released and broadcast on The Travel Channel and The History Channel. For many people this was the first time they’d heard of an Oklahoma Bigfoot.

The question we had: Why does BigFoot inhabit the places most notorious for growing cannabis? We went on a journey to Hochatown, Oklahoma to find out.

When you drive through Broken Bow to Hochatown, there is one thing that is noticeable and it’s the BigFoot statues, souvenir shops and symbolism of him plastered everywhere. There are Sasquatch themed dispensaries, and coffee shops serving homemade fudge shaped like BigFoot poop. But when we asked around no one seemed to have a personal experience or encounter of BigFoot, until our very last stop. That’s where some dispensary budtenders told us that their parents and grandparents definitely believed BigFoot existed and had indeed purported to have seen him on multiple occasions.

It was a stark contrast to Humboldt, California, where we had spent time in the past. In the Emerald Triangle, within Mendocino and Humboldt Counties, nearly everyone had a BigFoot story. Literally everyone we talked to believed whole heartedly that not only did he exist, but that they or their parents had seen him. Is there something generational about the sightings? If young people would look less at their phones would it free up their attention to realize there’s a seven foot tall Sasquatch nearby? And is there a connection? The physical and geographical similarities that Northern California and Southeastern Oklahoma share are uncanny but is that enough? In October of 1967, Roger Patterson and Bob Gimlin shot a short film in Bluff Creek, California that raised public interest to an all-time high. The image of Sasquatch in their movie became our most iconic. Less than five years later, Bigfoot had his second biggest fame boost when The Legend of Boggy Creek came out in August of 1972. Set and filmed in Fouke, Arkansas and Texarkana, only 85 miles from Hochatown, Oklahoma. So maybe there’s been a bit of evidence in the local consciousness for a while now. It was a popular movie after all and inspired the style of The Blair Witch Project.

Four years later in 1976, the Federal government launched an official investigation conducting lab tests on samples of hair and tissue thought to be BigFoot’s but later they determined it to belong to the deer family.

The North American Wood Ape Conservancy is based in Oklahoma and is dedicated to proving the existence of BigFoot. Their mission statement reads: “To investigate and conduct research regarding the existence of the unlisted primate species we refer to as the wood ape, also known as the sasquatch or bigfoot; to facilitate scientific, official and governmental recognition, conservation, and protection of the species and its habitat; and to help further factual education and understanding to the public regarding the species, with a focus on the continent of North America.”

There has been so much interest in Oklahoma’s BigFoot that Rep. Justin Humphrey filed House Bill 1648 in January 2021, which would draft rules, dates, hunting licenses and fees to catch the elusive creatures. Rep. Humphrey’s district includes Broken Bow, and he hopes that it will attract tourism to that part of the state. He also wants to offer a $25,000 reward for the first person to capture a BigFoot, rather than kill one, he hopes to draft the regulations to spare BigFoot’s life and prove his existence.

That might prove difficult, because according to the accounts and oral history of Native Americans, the Wood Ape is either a shape-shifter or perhaps trans-dimensional. They believe he can come in and out of our three dimensional world at will and can transform into mist.

While it’s good to have a healthy skepticism about folklore or cryptozoology, some states have formed laws against hunting BigFoot, which would seem to validate his existence. In Skamania County, Washington, they passed a law in 1969 deeming the “slaying of BigFoot to be a felony and punishable by 5 years in prison.” The law was later amended, designating BigFoot as an endangered species.

Not all places hold such a humanitarian attitude toward the mythical monster. In Texas it is perfectly legal to hunt and kill BigFoot. According to L. David Sinclair, the Texas Parks and Wildlife Department’s chief of staff, responded to an email about the legalities of BigFoot hunting in 2012, writing:

Because BigFoot isn’t recognized as an official species by the state of Texas, hunting one is technically allowed (with the proper license and permissions, of course).

BigFoot still receives hypothetical legal protection in other parts of the country as well. California takes the opposite approach of Texas when dealing with cryptids. The state keeps a record of nongame mammals in the California Code of Regulations. If any animal is missing from that list, as is the case with BigFoot, that means it can’t be hunted legally.

Oregon follows a similar policy to California’s, where any animal not classified under Oregon wildlife laws is considered “prohibited.” Like the rest of the Pacific Northwest, Oregon has a long history of alleged Sasquatch encounters. Michelle Dennehy, wildlife communications coordinator for the Oregon Department of Fish and Wildlife said, “We receive periodic reports of BigFoot sightings.”

There’s one more major factor that makes killing BigFoot a bad idea no matter where in the country you find yourself: If the victim is deemed to be more humanoid than ape, the crime could count as manslaughter or worse charged as a homicide. It’s kind of like certain story elements from the 1987 family adventure comedy, “Harry and the Hendersons.”

For BigFoot enthusiasts and believers there is an annual conference in South East Oklahoma. Hulu has a new 3-part documentary series called “Sasquatch” being produced by the Duplass Brothers (Wild Wild Country). The synopsis is: “While visiting a pot farm in Northern California in 1993, investigative journalist David Holthouse heard a story that still haunts him: On a nearby farm three men were torn limb from limb in a savage Bigfoot attack. Sasquatch follows David as he revisits the Redwoods 25 years later, in search of any evidence that might lead to the truth of what happened that night. As he pulls at the threads of this story, he’ll be taken down a path that’s far more terrifying than anyone would have imagined.”

The cannabis industry has embraced the mythic legend in a big way. There are dispensaries, processing companies, farms, and a variety of products that have Sasquatch, Bigfoot, or Yeti in the name. There are even individual strains of cannabis that have been developed. The Sasquatch cannabis strain is a hybrid not meant for beginners. With an average THC content of 26%, great color and terpene combinations of blackberry, cherry, and strawberry, this strain is loved by all who try it and treat anxiety, depression, and chronic stress. BigFoot Glue is a hybrid marijuana strain made by crossing Humboldt Headband with Gorilla Glue Number 4. BigFoot Glue has big, fluffy nuggets that are light green and purple. The aroma on this strain is pungent and piney, just like BigFoot. Yeti OG was bred by the NorCal collective Loompa Farms, and has become very popular due to its incredible taste and heavy yields. Yeti OG is a very good choice for relaxation and pain relief. The evidence seems to be everywhere. Sasquatch and cannabis are definitely connected. So the question still remains: What would Sasquatch Smoke?

The Honobia BigFoot Festival is held on the Grounds of the Kiamichi Mountains Christian Mission @ Christ’s 40 Acres in Honobia, Oklahoma. The 2020 festival was cancelled due to the COVID-19 pandemic, but the 2021 conference is being planned for the Fall. “Sasquatch” the documentary series debuts on Hulu April 20th, 2021.