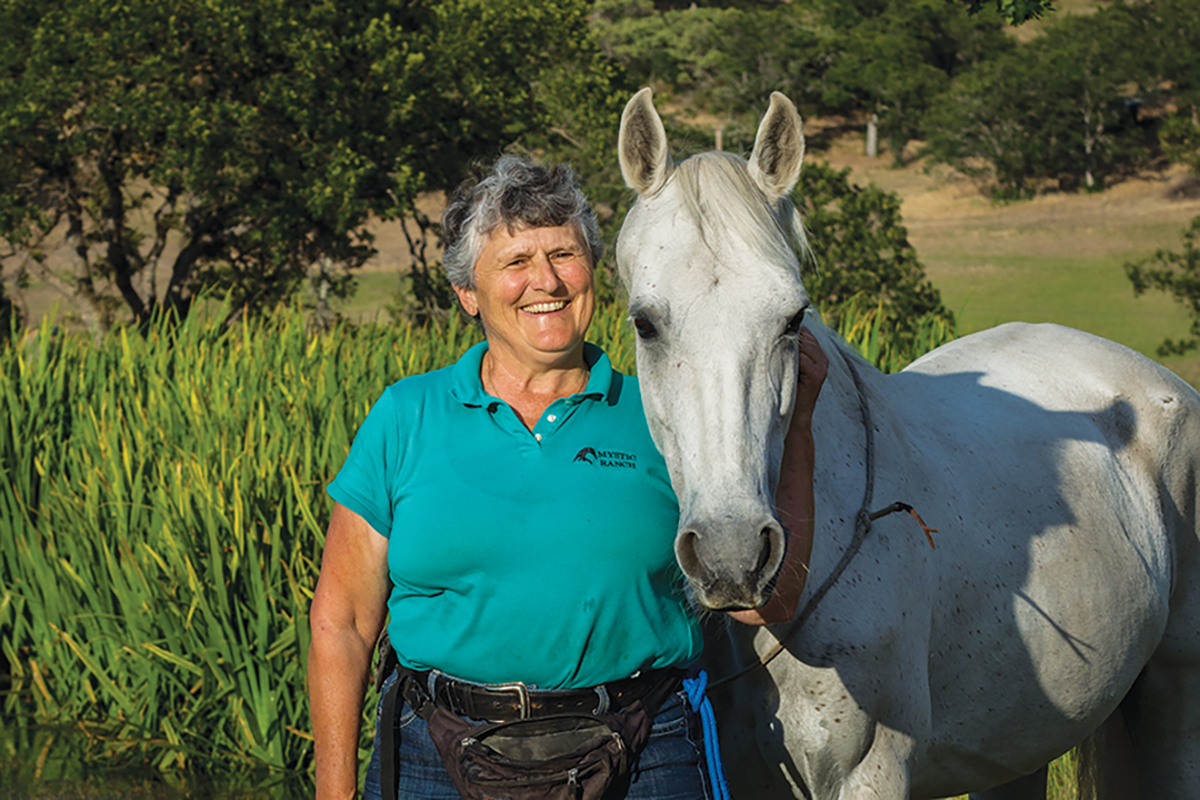 Tori developed equine melanomas under her tail, in her rectum and between her ear and eye, starting about the age of 9.  About 80% of grey horses develop equine melanomas so this is a widespread problem. Tori’s tumors were small and caused no difficulties for years but by about age 16, they started to grow very quickly, the ones under her tail developed gaping wounds that oozed black tar down her legs and tail and the ones in her rectum blocked her from passing manure, except by individual balls, with much pain and straining.

Her vet recommended that we put her down, because the tumors were too large and in a place too difficult to remove surgically and because no medication reduced their size.  Desperate to save my beloved mare, when a friend offered a jar of cannabis oil to try on the tumors, I leapt at the opportunity.

Because my vet had never heard of treating equine melanomas with cannabis oil, I took a monthly photo of Tori’s tumors and sent them to her.  We were both delighted to see the oozing wounds heal and to see Tori able to pass a normal rectum’s worth of manure.  No question, Cannabis oil had worked.

One day I read a post on Facebook from the owner of an Andalusian who had to put down her beloved stallion because of a bowel blockage caused by his equine melanomas.  I was shocked and realized that I had to get out the information that cannabis oil could help.

I took my photos and put them together in a case study for treating equine melanomas with Cannabis oil. If you would like to see the photos of Tori’s tumors over that first year of treatment, here is the link:

I treated Tori for the first year on 11% straight THC because that was what my friend gave me.  We only found out that the strain was Frost and had 11% THC. When people asked what I treated her with, I took in a sample to a lab for testing.

I think it worth noting that pure THC is what initially saved Tori’s life, closing those gaping, oozing wounds and allowing her to pass a full rectum of manure.  I have heard from a number of people who have tried pure CBD oil on their horses’ tumors who have not had as successful a response.

My only experience is with Frost and Swiss.  It is quite possible that other strains of cannabis would be more effective, but on the basis of my experience with Tori I recommend getting a balanced blend of THC and CBD.

As the photos in the video show, the cannabis oil worked best on the small secondary tumors.  They tended to grow a stem like a mushroom, get wobbly and eventually fell off, leaving a crater behind that had a white/yellow mucus like material at the base.  Over time those craters filled in, leaving the skin fairly soft and smooth, albeit leaving her with a still large tumor on and around her anus.

The cannabis oil did not eliminate her large tumor.  At best, it keeps it from growing any new small tumors on top and it keeps the mucous, which I see on cracks and interpret as cancer cells trying to grow back, under control. Her tumors are tender to the touch and Tori reminds me daily to be gentle when applying her oil.

The big change for Tori was that prior to treatment her melanomas only allowed her to pass single balls of manure, and that with great straining and pain and within a couple of months of starting treatment with cannabis oil, she started passing a full rectum of manure.  Prior to treatment, the vet tried to do a rectal exam and could not get her hand inside the rectum, the tumors were so large.

After treatment, a year later and 2 years later, the vet was able to do a rectal exam and reports that while there were still tumors inside, they were not blocking it any more.  We are now four years out and Tori continues to pass full rectums of manure and appears in good spirits and full of herself.

Tori has a hair covered melanoma between her ear and eye.  While I did initially try applying the cannabis oil on it topically, it did not seem to do anything so I stopped treating it topically.  It has not grown much in the last four years so the internal cannabis might be helping there as well.

I melt my cannabis oil, pour 10 mls of the melted oil into a syringe and syringe it into her mouth daily.  I also take a small jar of melted cannabis oil out, ask her to lift her tail and I gently coat all the tumors daily.

What Happened When Tori did Not Get Cannabis

We moved the horses from Oregon to Arizona 6 weeks before us to allow us to pack up the ranch.  The owner of the ranch where we would be boarding the horses wanted me to make up bags of food and supplements containing Tori’s medicine, rather than following my treatment protocol.  I did as she asked and was appalled when we arrived in Arizona to see Tori’s condition had deteriorated badly.  Since Tori hates the taste of cannabis, she simply did not eat any food that smelled of it and her tumors grew and cracked open, causing her great pain.  In addition, she was skin and bones from weight loss.  The owner of the ranch suggested that I put her down and if I was unwilling to do so, said she would have the vet out and get her destroyed.  I told her no and that I would see if she recovered once I got her back on my treatment protocol.

We moved, I got back to treating Tori daily and within a month the crack healed and the tumors subsided again.  If I ever had a question about the efficacy of cannabis oil on controlling Tori’s tumors, that question is answered.  If I were to take her off of cannabis oil, she would die.

Tori is now 21 years old (in 2022) and I started treating her with cannabis oil in 2016 after the vet recommended putting her to sleep because of bowel blockages caused by her equine melanomas. I wrote the testimonial shortly after posting the video of photos taken over the first year of treatment in 2017, but updated it to reflect the fact that the equine melanomas became much worse when the boarding facility discontinued the cannabis treatment for the 6 weeks in 2019 between the time the horses were shipped to Arizona and we closed on our home in Arizona and calmed down again after I was in Arizona and restarted treating her with cannabis oil. She continues to do well, eating well, pooping well and full of life.  One day the tumors may kill her, but that day has not yet come – thanks to cannabis oil.

1 cup of dried cannabis buds, broken up in a food processor, then spread out on a parchment covered cookie sheet and baked at 200 degrees for 20 minutes to activate the THC.  Put the toasted broken buds into a crockpot, along with 3 cups of coconut oil and cook it on low for 8 hours.  Once cooked, pour the mixture through a clean nylon to remove the plant material. Pour the resulting oil into glass jars.  Coconut oil hardens below 70 degrees or so and the mixture is shelf stable when stored in a cool, dark place.

I have been told that CBD slows cancer spread, while THC causes some cancer cells to self suicide and that is why full spectrum cannabis oil is more effective than just CBD alone.