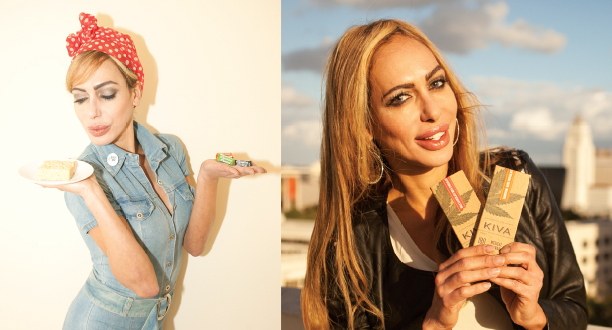 Just as Israel had been deemed the “medical marijuana research capital,” for breeding strains with super-high levels of CBD and no THC, and strains with the highest THC levels ever recorded, we came across our actress/model cover girl, Annabella Gutman, who is Israeli born. She is quite the mix being Brazilian, Czech and Polish. She scored her first real acting gig at 12 years old, starring in a Colgate toothpaste commercial, putting her performance experience from dancing ballet and doing school plays to good use. Annabella was only 15 years old when she first came to America, having landed a modeling contract in New York. She spent the next 4 years traveling the world, doing modeling from Toronto to Paris, Milan to Japan.

Her parents required her to study and graduate with good grades while modeling and working. She even attended the Academy of Art College to educate herself in business and films. Traveling a lot, she says she didn’t graduate, but it brought her to Los Angeles so she could pursue her passion of acting, producing, and directing. Annabella classifies herself as a very hyper person, and says that having turned to medical marijuana has helped her tremendously. Two years ago she went to her doctor and said she needed more Xanax for stress and anxiety. Her doctor suggested trying medical marijuana instead. Initially she was reluctant to this idea, and sensing her hesitation he assured her that it’s legal with a recommendation in California, and she would get better results. Now she medicates with marijuana about three times a weeks, and it helps her stay focused and calm. “To be honest, all my friends smoke pot…. It’s like coffee in the morning for them.” She says the people close to her that are hyper, have ADD or OCD, medical marijuana helps the most. She says her cousin, who is 28 with 2 kids and is married, smokes marijuana every day. She says if she didn’t have her pot she would lose her mind, or have a hard time functioning. Annabella said, “If it helps you calm down, and relax it’s a good thing. It’s much better than pills. The pills are not healthy for you and they are not natural.”

When I asked her how much of an influence marijuana has on the entertainment industry and Hollywood, she said, “A BIG influence. I work with a lot of entertainment professionals, musicians, actors. 90% of the industry smokes pot, mainly to be creative and stay focused… especially musicians. They need pot to write songs and be creative.” Her most recent project is a movie called, Rapture, which she produced with Client Eastwood’s daughter Kim. She says, “It’s a movie about the end of world, kind of like This is the End but in a sci-fi thriller style. It makes you grateful and humble makes you appreciate what you have, teaching you to make the best of it.”

In addition to writing and starring in her film “Blink of an Eye,” Annabella also has a documentary style film out called “How to Fail in Hollywood,” co-starring her friend Johanna Rae. It’s about two women from two different backgrounds trying to make it in Hollywood as an actress and producer. Everything they do goes wrong for them, without giving it away, it’s like I love Lucy and the Blues Brothers. The movie can be download online at:

She’s currently focusing on working on her next movie with other directors and projects. She loves comedy, and loves making a story really funny, while having humble wishes of world peace, coming from a country of war. Destined for acting and modeling she says, “I don’t know what else to do outside of the entertainment industry.”

When I asked her if she thought it was harder for a female to make her break in acting, she responded, “It’s absolutely harder for a female to make her break in acting. Unfortunately you have to deal with a lot of B.S. It’s not easy; you just have to be strong. All it takes is one person to believe in you for you to make it. I’ll flirt a little bit, but when it comes to crossing the line, I won’t go there. Plus, I’m germ phobic and sex is a big deal for me so I can’t sleep with someone to advance my career. But I’m pretty and nice so I think that’s helped me a little bit.” Of the film industry, she says, “80-90% of the film industry is all men, the cast, the crew, the

producers; you don’t see too many women. When you see someone like Katharine Bigalow win an Academy Award or Halle Berry, it’s a really big deal. I would like it to be more equal with women in the industry. Today you notice, women work, both sides work evenly. I would like it to be more equal with women in general, and I think our next president will probably be a female.” While she says that every project is different, and doesn’t have a favorite project she’s worked on, she did say that acting in Collateral with Tom Cruise and Jamie Foxx was definitely one of the highlights of her career. She had just moved to LA, it was a scene dancing in the club, getting sexy with Tom Cruise. They ended up cutting the scene but you can see it on HBO’s The Making Of. She kept his ear plugs (from shooting scenes) and sent them to her sister. Now it’s one of her favorite films. Annabella looks up to powerful, smart and brave people in the film industry like Steven Speilberg, Julia Roberts, Kate Blanchett, Angelina Jolie, Oprah Winfrey and especially Natalie Portman who is also from Israel. In 10 Years she sees herself running a successful film company, producing movies, collaborating with directors on comedy, action, drama, and sci-fi. “I love movies that give you a message and Inspiration.” She gives back in her own ways, like donating her rare blood type to the Red Cross, and volunteering her time to Ace of Hearts and World Peace One. 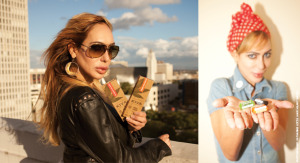 Like Oprah Winfrey and Chelsea Handler, she hopes to one day have her own talk show, interviewing celebrities and promoting nonprofit organizations. Of course, she wants to be married with a baby by then. But for Annabella Gutman, right now her career is first, so no babies yet. She does dream of one day being able to move her family over from Israel to America. Her message to any aspiring actresses or actors out there, “Go after your dreams, and never give up. Be prepared, it’s never going to be easy. Go for it, think outside the box. Don’t be like everybody else; because it’s boring, and no one will care. Be ambitious, a hard worker, and never give up until you make it to the top. Just do it!”