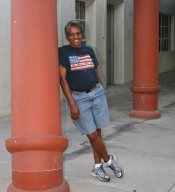 Hall of Famer basketball player and Los Angeles resident, Angela McCard shares with us her story on her how medical marijuana helps her cope with chronic pain.

EL: Tell us about your sports career.

I started when I was pretty young, because I hated being inside, and when I was in high school, I was pretty fortunate, I was a transfer student to Hollywood High in the tenth grade. I came in and they couldn’t believe what an athlete they had. There was only one other athlete like that before me, and her name is Angela, and my name is Angie. It was kind of weird because they called her Red, and well, you know what they called me, Blackie. It didn’t bother me at the time, I was quick, I didn’t care. Catch me if you can. So I played basketball at Hollywood High, we weren’t very good but it was fun. I played volleyball, softball, and ran track and field with the boys. At the time they didn’t have a girl’s track team. Coach Rippy used to love to put the girls in to run against the guys, and some of the guys wouldn’t run against us. But that’s okay, because the guys that would we’d beat anyway.

Then I went to LA Valley, where I played basketball. I loved playing there, we had two great teams. The first year I was there we took first in league, and we lost state in our own gym. But it was 7 against 5. It was our 5 plus their 5 plus the two referees. It was the worst game I’d ever seen. People even came out of the stands after the game and told us, “There was no way that you guys were going to win that game, the referees were calling it against you guys.” So the next year, we got together and said, “Alright, you guys we have to avenge that loss, because that was horrible, and it was in our own gym.”

Our coach didn’t say anything, but she got us a couple better players, then we played some of the same teams. We weren’t ranked in our league, we were supposed to take 5th, and we said we weren’t having that. We went out and won State, and took 2nd in our league. After doing that we qualified for nationals, but we said as a team we wouldn’t go, because if we all couldn’t go, no one was going. We had two girls that weren’t eligible to compete so we lost the chance to go Nationals. In 2008, that team was inducted into the Hall of Fame for LA Valley Junior College. So I can actually say I’m a Hall of Famer. I went back to school in 1984, and I ran track and field for Orange Coast College. I had a great time there because the track team was fun and full of younger kids than I was. I was called Grandma. I was 24 years old and they were all 17 and 18. I qualified for the Heptathlon, which is 7 events in 2 days, the high jump, the long jump, shot put, javelin, 800m, 200m, and 110m hurdles. I did really well, I took 7th.

The sad part is that the girl who was running behind me in the 800m, went on to set state record, beating my teammate, because her coach told her to run on the heels of the girls on Orange Coast, they run together. She did that and she took me at the last 200 and broke the record. I told my teammate, “Don’t worry about it, I’ll get that record for us next year,” and I did. I went back to Heptathlon, took 7th again in State, but I set a record in the 800, it was 219 flat. It was a record for seven years. I was pretty lucky.

EL: Out of all of your experiences, what has been the highlight of your sports career?

I would probably say, playing basketball. Going into the state tournament being the underdogs. We partied together, we played together, we even taught the boys volleyball team how to do The Hustle. So we knew that was our game to win. We had been such a good cohesive team, and that was such a fun time. Every time we get together we think about all those fun times we used to have and all those wild parties.

EL: How and why do you use medical marijuana?

For pain, lots of pain.

EL: What kind of pain do you have that you are treating?

I have chronic pain in my right hip, my right shoulder, my neck, and all along my spinal cord, from two car accidents and a bad surgery.

EL: How does medical marijuana help you manage your pain?

It takes the edge off, so I’m not so grumpy. That’s one of the things, if I can’t smoke it, I get grumpy, because I hurt. I’ve tried candies, some candies work, some don’t. It depends on what the pain level is, and how bad I’ve let it get.

EL: How do you think medical marijuana helps the community?

It gives people a chance to take something besides a pain pill. There are side effects from pain pills, kidney damage, liver damage, who knows what else. There are no side effects from marijuana. The police would rather have a person smoking weed than a person in a car driving that’s been drinking. I’m sorry, but I’m not going to go out there and try to do something stupid. I look at it like a video game and the object is not to crash and burn.

EL: If you could tell non-patient skeptics one thing about medical marijuana, what would it be?

It’s easier for me to deal with the pain when I take a couple puffs, because it takes the edge off. If you don’t know what I mean by “takes the edge off,” sit on the floor grab a hammer and hit yourself in the foot. Then take something [like a pain killer], realize, “Oh, hey, that didn’t work.” Then go smoke a joint, I guarantee you’re going to say, “Hey, now that works.”

I have this little one hitter and a take a few hits off that. It’s my favorite way to medicate. I don’t really like bongs because you take in too much. I have asthma, so on top of everything else, who wants to deal with the cough, cough, cough. I love my one hitter because I can take it anywhere, take a few puffs, and no one objects.

EL: How does smoking affect your asthma?

It actually helps it, because it opens up my lungs. I can tell when I’ve smoked a lot and when I haven’t when I go to the doctor. I just went to the doctor. I had my lungs checked, and they’re clear, which for an asthmatic, that’s an awesome thing. He knows, and it’s written in my records that I smoke marijuana. So he knows, and he knows I’m not going to quit. He says he wishes I would vaporize, but until I find a vaporizer that I like, forget about it. It just takes the edge off, marijuana takes the edge off.

EL: What vaporizers have you tried?

I’ve tried the Vapor genie and the pipe with the bowl. When I go to Vegas to visit my brother, that’s how I medicate, because my brother is allergic to smoke. For him, I take that, and I have a great time. I get some nice hits off that, it’s cool and copesthetic. I’ve tried the vaporizer box with the hose and knob. I also tried the single vaporizer hits, and I’m not too big on those. Most of them don’t have good flavors.

EL: Do you eat edibles?

Yes. I love candies, not too big on the chocolates. I like Kiva Bars though. I took those on a cruise with me, shared it with some of my friends. One guy was hurting, I told him to eat this, it will take away the pain. He couldn’t believe how well he felt. I’ve tried these new gummie bears, and they are my new favorites. I can take them to work, pop two of them, and be comfortable for at least 4-5 hours, its awesome. Kudos to MediZen for making those gummie bears. You gave me some white chocolate that was amazing, I was pretty impressed with it. I don’t like Hubby Bars, they’re too concentrated, it’s too much chocolate. Too much, too fast. Cookies drain me and make me want to sleep. With brownies, I want more and more, which is a problem when it’s laced.

EL: Where is your favorite collective to get your medicine?

California’s Finest Compassionate Co-op. It’s the only place I go. They have the best budtenders. The receptionists are all fantastic. When you come through the doors the receptionist is always smiling. Now a lot of places that you go, you don’t get that, people are grumpy. It’s like dude, if you don’t like your job, get another job. But these people, everyone is smiling from the time you walk in to the time you walk out. I love talking sports with EJ and Mark there, those guys know sports, so it’s fun for me to sit there and have great conversations with you.

Kudos to Waylon, you’re the bomb diggity. B – keep doing what you’re doing. Cali’s Finest is the greatest shop. Megan, you’re my favorite bud-tender – keep smiling girl, you can always tell if I need to go higher, or indica or sativa.