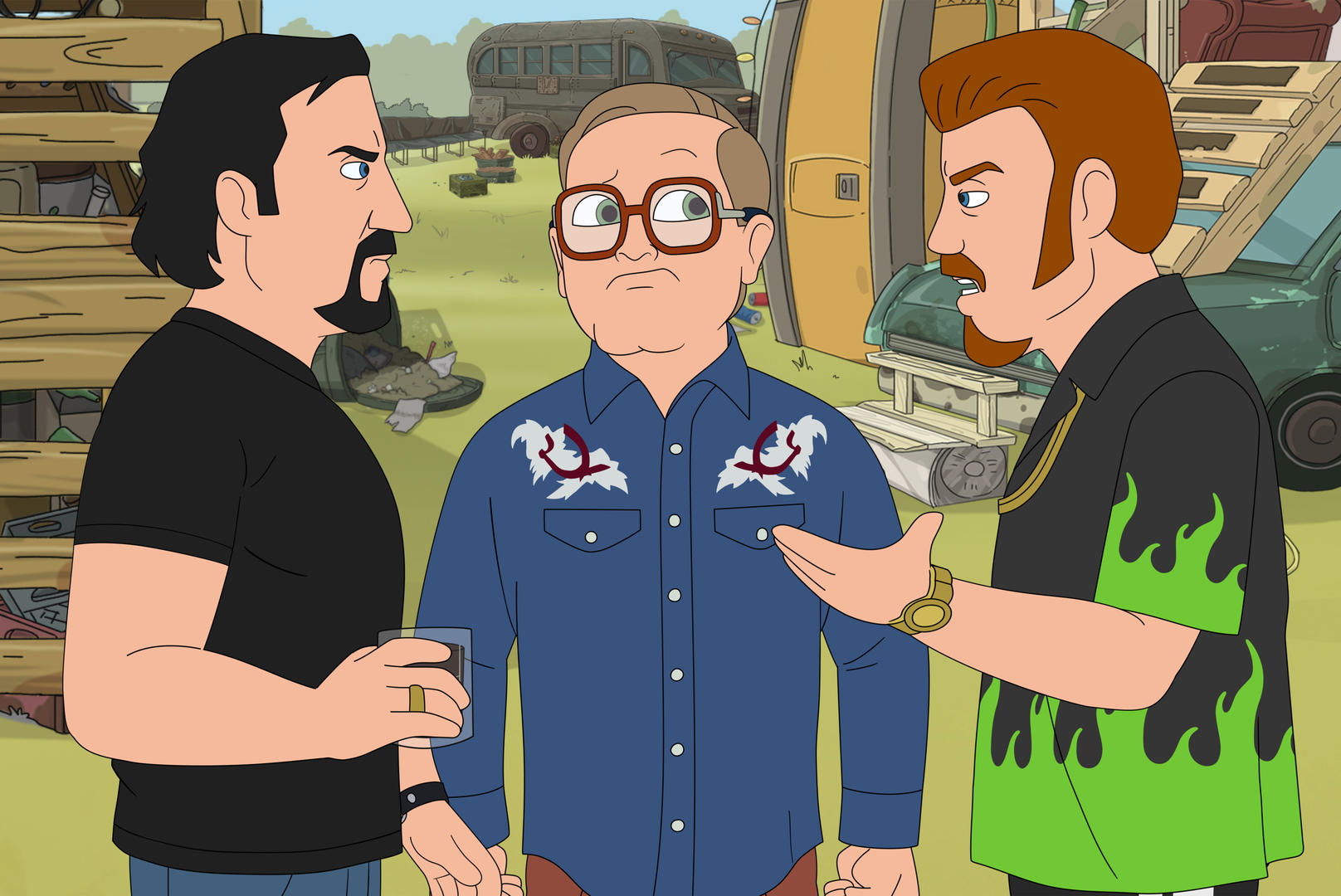 Trailer Park Boys started out as a 1999 Canadian mockumentary film, but it wasn’t until 2001 that the series as we know it debuted on Showcase, the Canadian television network, where it stayed until 2007. Seven years later in 2014, the series was given new life at Netflix where it thrived thanks to the cult status it managed to achieve amongst fans online, many of them American. The show follows the lives of residents of the Sunnyvale Trailer Park in Nova Scotia, and is focused on Bubbles, Julian and Ricky. Julian is an alcoholic and muscular thief, and Ricky is a pot growing, chain smoking drug dealer. Bubbles loves cats, steals shopping carts and is something of a man child and the three of them are all ex-cons. Now Trailer Park Boys has been turned into a cartoon, and in one of the new episodes they go to outer space to cultivate cannabis in zero gravity. The episode is titled “Space Weed” and it actually reminded me very much of our “To Boldly Grow: Cannabis in Space” article from 2017. We interviewed Dale J Chamberlain the former NASA botanist and bio-engineer who runs the High Altitude School of Hydroponics (HASH) in Colorado, and he talked about a lot of things with us that seem to have possibly inspired some of the finer details of this episode.

In our original interview we asked, “Will cannabis grown in outer space be better… possibly affected by gravitational changes?” Professor Dale told us that, “Eliminating the factors working against an organism increases its production (Liebig’s Law of the Minimum). In this case reduced gravity stress should increase Cannabis oil production and should make for some huge buds with tiny little stems inside.” That’s why growing in zero gravity would work so well and that’s exactly what Ricky does in ‘Space Weed’. After trying to grow upside down, he is inspired to try growing in no gravity at all.

When we asked him if NASA had made plans or preparation to cultivate medicinal or recreational Cannabis, or industrial hemp as any part of our space exploration program? The Professor was quick to say no, but that “Companies such as Boeing, Blue Origin, SpaceX and other private companies are in the game – the new space race is on!”, and that’s exactly how the boys go to space, onboard a private company’s space station owned by a very Elon Musk type character and not as part of any official government space program.

And lastly, Prof. DJC mentioned, “Remember- there’s no smoking in space, so edibles are where it’s at, and where it’s going!”, and there’s a running gag in the TPB cartoon where Ricky keeps trying to smoke in space and Bubbles keeps stopping him.

Space is a hot topic lately. NASA astronauts Anne McClain and Christina Koch were supposed to perform the 1st all female spacewalk on March 29th, but McClain wasn’t able to participate because there weren’t enough spacesuits the right size. The annual Lyrid meteor shower, named after the constellation Lyra, is just around the corner and expected to peak on April 22nd. Space Food Sticks are snacks created for the Pillsbury Company in the late 1960s by the team responsible for the first solid food consumed by a NASA astronaut and were promoted for their association with NASA’s efforts to create a safe, healthy and nutritional space food. Now Space Food Sticks are back and they’ll soon be infused with THC and CBD. July 20th, 2019 will mark the 50th anniversary of the first humans landing on the Moon on July 20, 1969 as part of NASA’s Apollo 11 lunar mission. Vice President Mike Pence recently announced that we’ll have astronauts back on the moon by 2024, although NASA wasn’t planning that until 2028.

So maybe we did inspire this episode of the Trailer Park Boys cartoon. That’s cool with us, it’s a funny show and their cannabis references have always been on point. It’s good to be an inspiration, but next time maybe call us first, and we can even help. Watch “Trailer Park Boys: The Animated Series” exclusively on Netflix and check out Professor Dale’s Book on Amazon: “Aromatic Cannabis Cultivation: Grower’s Guide to Great Ganja”.

And May the Force be with You, because May 4th is right around the corner.