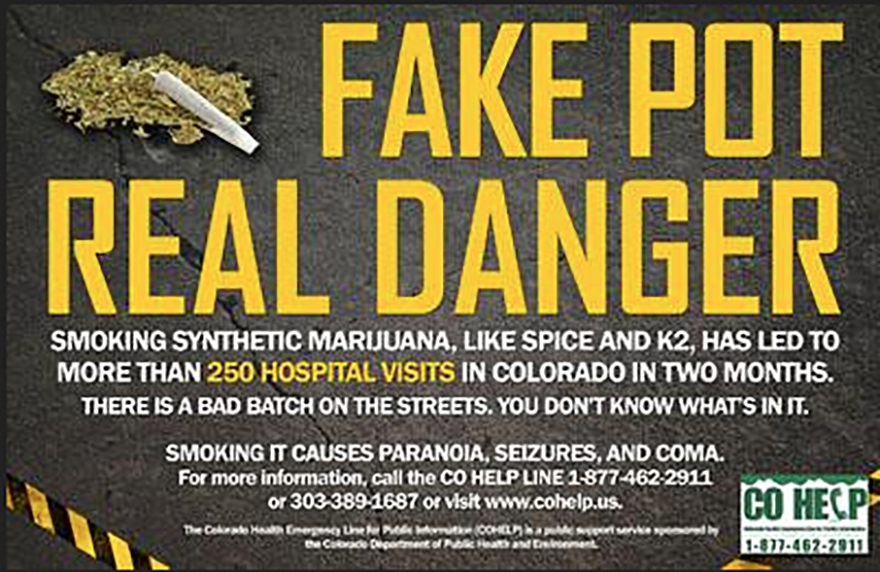 People across the nation are falling prey to a new and potentially dangerous artificial drug: synthetic cannabis, primarily sourced from the Middle East and China. Synthetic cannabis comes in small pots, and according to a spokesperson from the DEA, comes in 400 different varieties and goes by hundreds of names like Spice, K-2, fake weed, Yucatan Fire, Bliss, Blaze, Skunk and Moon Rocks. Synthetic cannabis, unlike pot however, can cause a huge variety of symptoms, which can be severe including: Agitation, vomiting, hallucination, paranoia, tremor, seizure, tachycardia, hypokalemia, chest pain, cardiac problems, stroke, kidney damage, acute psychosis, brain damage
and even death.

Synthetic cannabis is made in underground labs, often in China and the only constant is that there is no quality control in the formulation process. Without regulations the results can be deadly since the drug can be up to 100 times stronger than marijuana.

The process for extracting and creating this synthetic drug seems complicated and unnatural (dissolving chemicals in acetone and spraying them on plants to dry) leaving active ingredients found in painkillers, cancer treatments, and fertilizers.

Dr. Sherri Kacinko, a toxicologist with NMS Labs, commented, “(I joke) if you’re going to use “fake pot”, please give me a call. Give me your blood and urine for research testing, because we’re not even allowed to give it to rats.”

Though many of us would object to anything other than marijuana’s natural form, the drug is more widely available – sold in smoke shops – and is cheaper than pot. Additionally, one reason for it’s popularity is that it does not show up in drug testing. The latter is particularly advantageous for military members, as drug tests cannot pick up the synthetic cannabis in their systems thus, often making them regular users.

Synthetic cannabis is another unfortunate concoction created by man for reasons of profitability, convenience and availability, but with the complications of using synthetic cannabis, it should be strictly regulated (if not illegal). The dangers are overwhelming, not to mention the mere thought of consuming synthetic cannabis seems to be opposing everything natural not fake and synthetic.

HealthNewsColorado.org’s recently posted signage, which does quite a good job of describing the effects of synthetic cannabis: 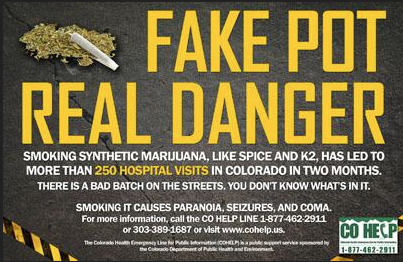