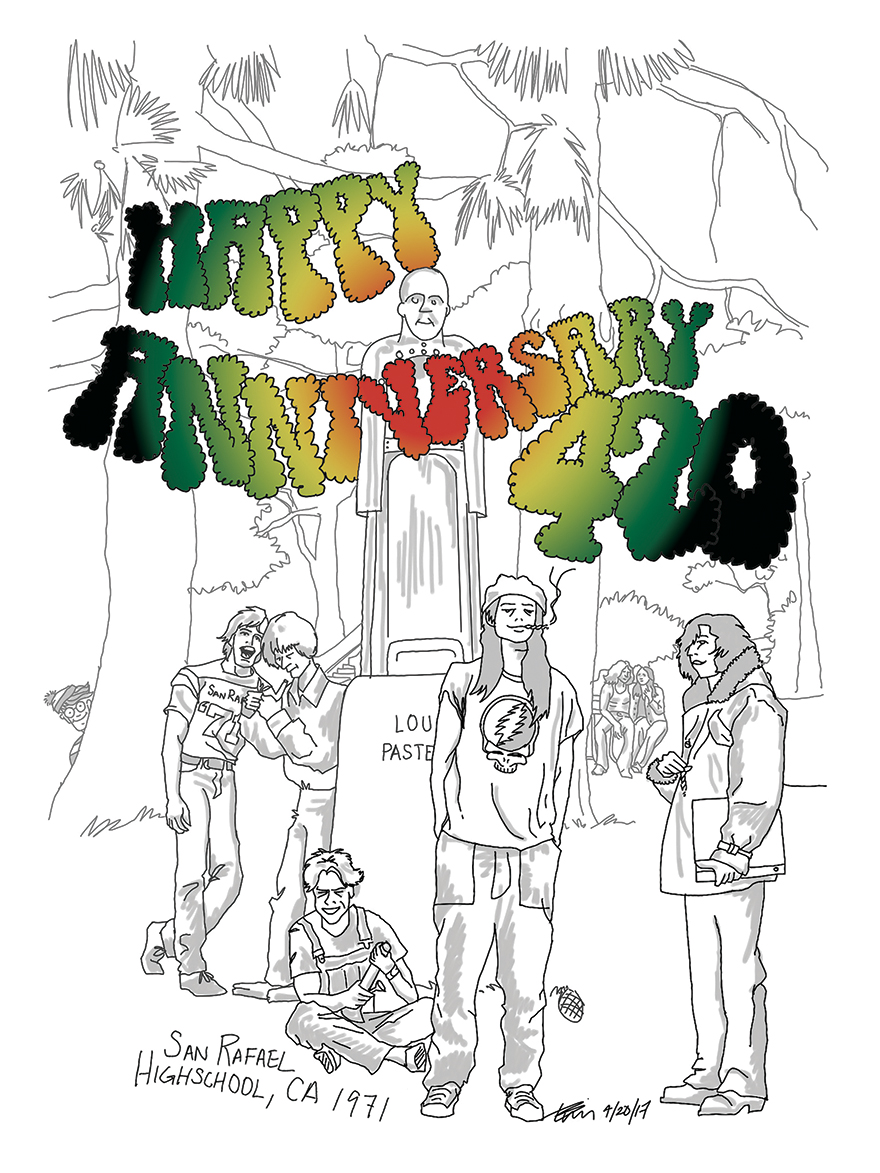 April 20th, or its numerical counterpart 4/20, will forever remain as the official holiday for cannabis. People will light up their joints and bongs at exactly 4:20 to honor this sacred plant that many have worked so hard to make available across the world. However, what is the true meaning behind these three magic numbers? The four most popular myths have it that the numbers are related to the supposed amount of active chemicals, the date of Hitler’s birthday, a fictional police code for marijuana possession, and the name of one of Bob Dylan’s songs. However, many news sources, including the Huffington Post, the LA Times, Vice News, and even the strict and skeptical Snopes.com have put these rumors to rest as they’ve all agreed that the credit for the numbers go to a group of teenagers during the 1970s. The Huffington Post interviewed two of these five friends who went by their aliases Steve and Dave who came forward with the story.

In 1971, a group of five friends from San Rafael High School had coined the term. This clique called themselves “The Waldos” due to their choice of their common hangout which was a wall outside of school. One day during the Fall, the Waldos had heard of a secret marijuana patch near the Point Reyes Peninsula Coast Guard station. The patch was grown by a member of the Coast Guard who could no longer tend to the plants. So with a treasure map in hand, the Waldos decided to organize a weed hunt after school.

Since all the Waldos were athletes, they agreed to meet at 4:20 after practice. “We would remind each other in the hallways we were supposed to meet up at 4:20. It originally started out 4:20-Louis and we eventually dropped the Louis,” Waldo Steve told the Huffington Post. “We’d meet at 4:20 and get in my old ‘66 Chevy Impala and, of course, we’d smoke instantly and smoke all the way out to Pt. Reyes and smoke the entire time we were out there. We did it week after week,” said Steve. Unfortunately, after weeks of searching, the patch was never found.

Despite their failure, the friends found a nifty code-word based on their meetup time that would easily go under the radar of parents and teachers alike. “I could say to one of my friends, I’d go, 420, and it was telepathic. He would know if I was saying, ‘Hey, do you wanna go smoke some?’ Or, ‘Do you have any?’ Or, ‘Are you stoned right now?’ It was kind of telepathic just from the way you said it,” Steve says. “Our teachers didn’t know what we were talking about. Our parents didn’t know what we were talking about.” With the origin identified comes the next big question, how did the Waldos’ code-word manage to spread across the globe to make itself synonymous with cannabis itself?

By the late 60s and early 70s, the hippie culture in San Francisco had all but collapsed. Many fled the Haight-Ashbury district, which is the origin of hippie counterculture, to search for more peaceful settings. Among those who left was the psychedelic rock band the Grateful Dead, who to the Marin County hills – just blocks away from San Rafael High School. Soon, the Waldos and the Grateful Dead would cross paths.

A father of one of the Waldos took care of real estate for the Dead while Dave’s brother Patrick managed the sidebands and was friends the Dead’s bassist Phil Lesh. In his interview with the Huffington Post alongside Dave and Steve, Patrick says he’s occasionally smoked with Lesh, but he doesn’t recall whether or not he used the Waldos’ codeword 420 around him. Though, Steve admits the possibility by saying, “[The Grateful Dead] had this rehearsal hall on Front Street, San Rafael, California, and they used to practice there. So we used to go hang out and listen to them play music and get high while they’re practicing for gigs. But I think it’s possible my brother Patrick might have spread it through Phil Lesh. And me, too, because I was hanging out with Lesh and his band when they were doing a summer tour my brother was managing.”

The Waldos had open access to the Grateful Dead’s parties and rehearsals and often used the term “420”. “When somebody passes a joint or something, ‘Hey, 420.’ So it started spreading through that community,” said Steve. Soon after, the Dead took the term with them on their world tours during the 70s and 80s and it spread throughout the band’s fandom. It wouldn’t be until 1990 that New York-based monthly cannabis advocation magazine High Times would come to elevate “420”.

Steven Bloom, a reporter for the High Times, said that he was wandering around a parking lot which served as the “market” for Grateful Dead shows said that he was handed a yellow flyer. The message read, “We are going to meet at 4:20 on 4/20 for 420-ing in Marin County at the Bolinas Ridge sunset spot on Mt. Tamalpais.” Fascinated by the term, Bloom took his find to High Times which then published a copy of that flyer in its 1991 issue. Soon after, High Times began to use the numeric code more liberally as it was used in reference to practically everything cannabis-related. “I started incorporating it into everything we were doing,” said former High Times editor Steven Hager. “I started doing all these big events – the World Hemp Expo Extravaganza and the Cannabis Cup – and we built everything around 420. The publicity that High Times gave it is what made it an international thing. Until then, it was relatively confined to the Grateful Dead subculture. But we blew it out into an international phenomenon.”

The Waldos say that within a few years their own code phrase would spread throughout their hometown of San Rafael and eventually beyond California. Dave and Steve even say that by the early 90’s they started hearing “420” being said in Ohio, Florida and even Canada. They even saw the number graffitied on signs and etched into park benches. In 1997, the Waldos decided to set the story straight and contacted High Times.

Hager then flew out to San Rafael to interview the Waldos and others in their hometown and examine the Waldos’ evidence before concluding that the Waldos were telling the truth. “No one’s ever been able to come up with any use of 420 that predates the 1971 usage, which they had established,” said Hager, in his support of the Waldos’ claim, “So unless somebody can come up with something that predates them, then I don’t think anybody’s going to get credit for it other than them.”

“We never made a dime on the thing,” says Dave, half boasting, half lamenting. Despite the lack of royalties, the Waldos are nonetheless proud of their achievement. The Waldos claim that their friends and families boast to others that they personally know the ones who coined 420. Dave even says that High Times even paid for a trip to the Cannabis Cup in Amsterdam in 2009. Dave and Steve now work together in a specialty lending company, though they have little time to smoke pot anymore. The other three Waldos have managed to find their careers in marketing for a Napa Valley Winery, printing and graphics, and gutter cleaning.

Who would’ve thought that a meetup time between friends would grow to become a code phrase for the green goodness itself? It would even become the namesake for California’s breakthrough 2003 Marijuana Medical Program Act, SB 420. The number has even made waves in pop culture as movies and TV shows such as Pulp Fiction, Lost in Translation, Family Guy and the Simpsons have all of the clocks set to 4:20.

As April 20th approaches, let us remember that the significance of cannabis wouldn’t have been made possible without the adventurous pursuits of five young friends.