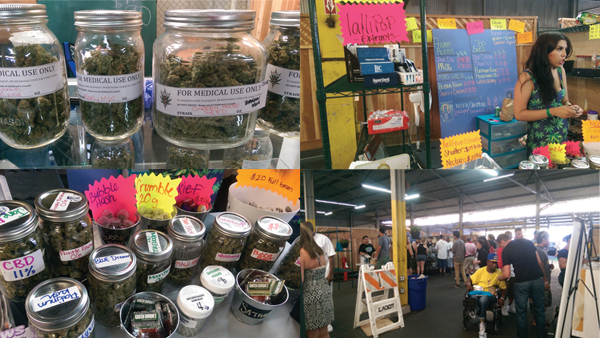 The new medical marijuana farmer’s market was the ”talk of the town” July 4th weekend in Los Angeles. The marked was named the California Heritage Market, and is located in Boyle Heights. This type of market stems from an existing model in the state of Washington, although it is a rather new concept to California. It’s main purpose is to bring growers and edible vendors together without the dispensary overhead. Cutting out the “middle-man” allows vendors to offer their medicine at better prices, some items near wholesale pricing. Additionally, it allows the producers to meet and directly educate their end patient users openly with easy access to producers, and growers not available in small shops with retail inventory.

Close to 7,000 patients came through the market over the 4th of July three day opening weekend. Attendees, and customers included the press, law enforcement and undercover Federal agents. Things slowed down exponentialy the second weekend with only a few hundred patients attending due to a glitch in the advertising making it unclear that the market was scheduled to take place every single weekend thereafter.

Former market event coordinator“ Paizley Bradbury commented, “Our goal is not to have long lines, we want the patients to be able to have easy access to the medicine.”

The weekend after the grand opening Los Angeles City Attorney, Mike Feuer, filed an emergency injunction for a temporary restraining order on the marketplace, and on July 15th, an LA County Superior court judge agreed to temporarily halt operations of the marketplace.

Feuer, said that the marketplace doesn’t comply with city laws for medical marijuana dispensaries. Locally, residents in LA are awaiting the enforcement of a plan to shut down over 800 dispensaries. In November 2013, Proposition D was passed by voters which basically stated that only existing shops open prior to 2007 with “Pre-ICO” (Pre Interim Collective) status, could continue to operate legally. The zoning requirements for collectives slightly changed as well, which could mean that less than 135 of the original 180 shops in Los Angeles are going to stay open. Currently in the Greater Los Angeles Area there are over 2,000 collectives in existence, including delivery services. A budget was just passed with the LAPD to fund the raids, making it a scary scenario for patients looking for safe access to medicine.

Feuer contends that Proposition D doesn’t allow for multiple, independent vendors, to sell in one place. But Proposition D was not written with the intent to cover events like these.

In a Los Angeles Times interview Feuer states, “The court was very clear: There could be no multiple vendors selling at this site, only bona fide employees.”

An attorney representing Progressive Horizon Collective said, “A farmers market is no different from a dispensary in that they both sell goods from a variety of vendors.”

Stories from marketplace attendees went around quickly about how Federal agents were harassing vendors, trying to get them to meet outside of the marketplace, and trying to get patients to give them their medicine while walking back to their cars. I recall stern, almost angry looking faces on people that did not look like cannabis users or patients looking for medicine.

In the midst of the marketplace closing down it became unclear if the correct permits were obtained and established in advance.

“The market”, Feuer said,” constituted an unauthorized, unpermitted use of the property” because its operation did not obtained required zoning approvals.

Feuer also stated that the operation “violates California’s unfair competition law and detracts from the quality of life of the community and unjustly enriches the defendants.”

The former executive director of California Heritage Market says that she spoke with an engineer with the city’s Building and Safety Department who told her a permit was not necessary. On August 3rd, 2014 the California Heritage Marketplace claims they will be opening their doors again, even though their next court hearing regarding the temporary shut-down is scheduled for August 6th.

The final outcome for the new LA MMJ farmer’s market is yet to be seen. It’s a model that is working successfully in Washington on a once a month basis, and attendee patients are able to obtain medicine at wholesale prices like the $5 top shelf grams Washington Markets sell.

We look forward to that here in California once our state’s evolution process catches up with Colorado, and Washington.

BY B. LE GRAND
EDITOR-IN-CHIEF