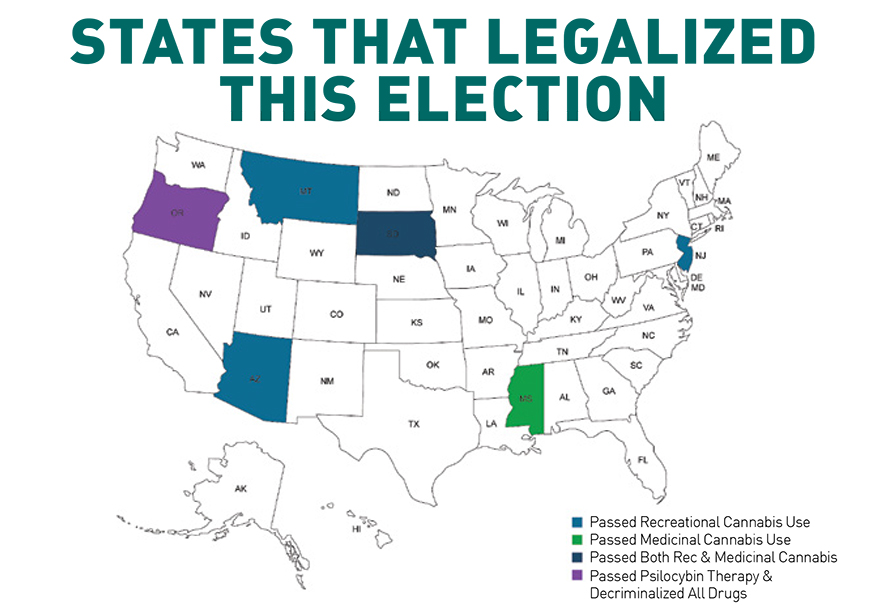 The biggest winner of the election: Cannabis!

America was clear on one thing this election, November 3rd was a huge WIN for Cannabis and Drug Reform in the United States of America!

Arizona’s Prop 207 passed which for people 21 and over means they can possess and grow cannabis. The legislation also includes measures expunging criminal records for possession and driving under the influence in cannabis. The law becomes official Nov 30, 2020.

Montana voters passed Initiative 190 with just 57% of the vote. Half of the Cannabis revenue will go towards environmental conservation programs in the state and the rest will go towards veteran services, substance abuse treatment, healthcare, and a general fund. People over the age of 21 will be able to use cannabis starting Jan 1, 2021.

New Jersey Residents voted yes on the Cannabis referendum, but these are not official laws yet. New Jersey’s governing bodies must still pass regulations and laws concerning the industry and limits on personal use and possession. As of now, police are still making arrests according to the existing laws.

South Dakota passed both Recreational (54%) and Medical (70%) cannabis, the key differences being the possession limit and dosage access. Recreational cannabis will be legal in the state by July 1, 2021 and medical regulations will be available Oct 29, 2021.

The citizen-led effort of Initiative 65 passed (74%) and allows doctors to prescribe medical cannabis to those with ALS, cancer, epilepsy, HIV, and 18 other conditions specified in the initiative. The program will be in place August 2021.

In addition to the states that passed Cannabis, some also took great strides in drug reform:

Measure 109 authorizes a two year period in which Oregon legislators will have to create regulations for use and what medical professionals can authorize its use. Mushrooms would not be available to the public, it will only be stored and administered at licensed facilities.

Oregon’s decriminalization of all drugs (Measure 110) is an amazing step to ending the war on drugs. The measure removes criminal penalties and opts for a $100 fine and if a person can’t/ won’t pay it they must do a health assessment at an addiction recovery center. All money that would have gone towards arresting, prosecuting and incarcerating those people will now be redirected to addiction treatment services.

The measure decriminalizes psychedelic plants and mushrooms and instead makes it one of the lower priority law enforcement policies.