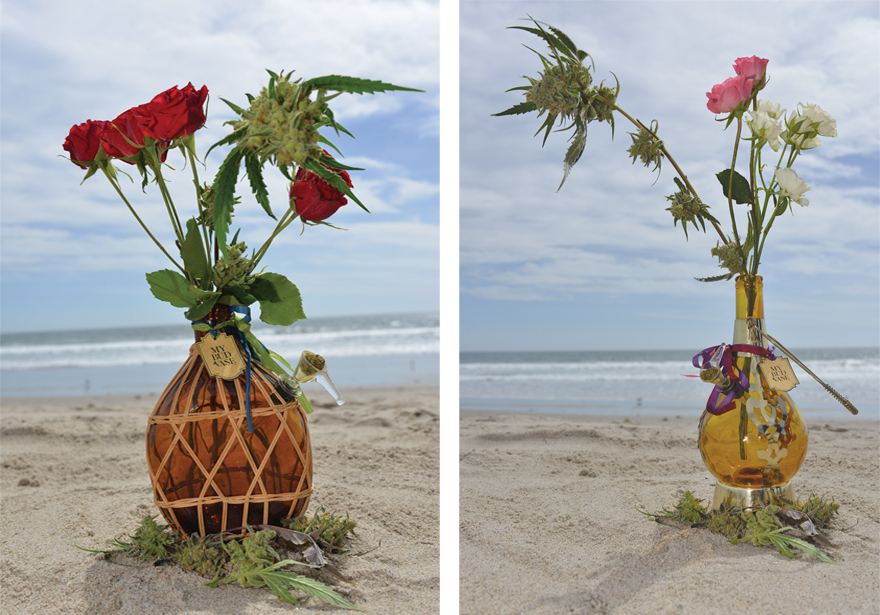 Doreen Sullivan was born in Los Angeles, California but she now lives in Charleston South Carolina where she also runs her business, My Bud Vase™. Doreen says “My Bud Vase adapts a variety of vintage and antique pieces into fine smoking implements and provides distinctive, elegant and discreet water pipes for the more sophisticated smoker.” She’s a sophisticated smoker herself and began her own journey with cannabis when she was just fourteen years old and has always loved antiques and held a deep appreciation for beauty. The mission of My Bud Vase™ is to create pieces that are beautiful and that belong in the home. Doreen’s creations can be openly displayed and shown off but are also very discreet looking for those who would rather keep a low profile. Her target audience was originally predominantly female, but over time it has become evident that men also really seem to especially appreciate the finely tuned craftsmanship that goes into creating these types of functional devices and they truly are cherished by all ages. Younger female customers in their early to mid twenties usually love the smaller pieces she makes, while those in their thirties and forties tend to go more for high-end, large items and really like the show stopping, gorgeous centerpieces. Baby-boomers who are using cannabis specifically for medicating a particular illness, tend to like a piece that sits by nightstand and isn’t too elaborate. Of course she doesn’t stereotype, and these are only a few observations she’s picked up along the way. She is always continually surprised and enlightened in new ways by her customers and the diverse demographics represented. 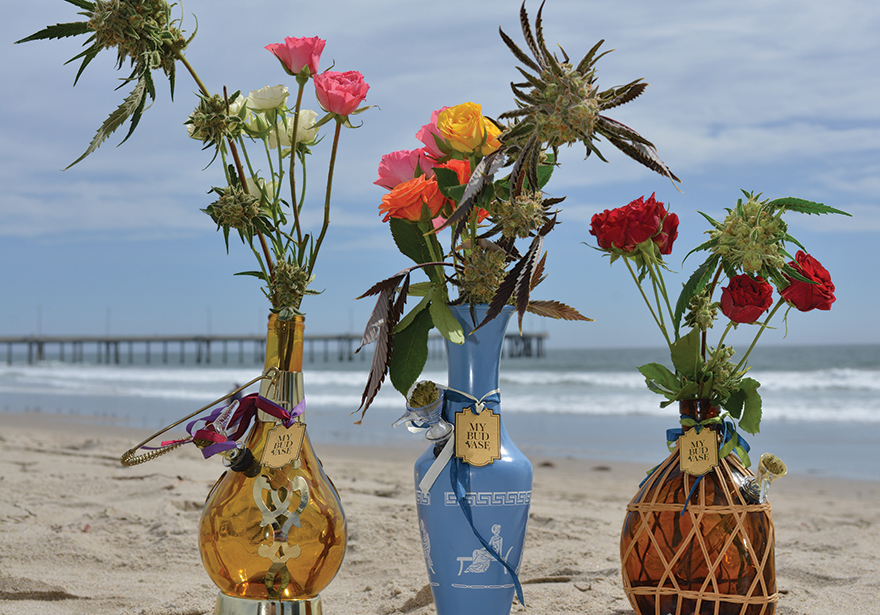 Doreen believes the future of cannabis is going to be very collaborative, as new operators continue to enter in from other industries and the multiple businesses who bring a wealth of new expertise to add fuel to the ever growing world of medical and recreational cannabis. She is also proud and pleased to see the industry is so female driven and co-creative and has no doubt things will keep evolving on this path. One of the most special experiences to happen to Doreen lately was at the 2017 High Times Cannabis Cup in San Bernardino. Two women in their mid seventies approached Doreen’s booth toward the end of the day and told her they’d been wandering the event all day long and felt overwhelmed and intimidated the entire time. They were exhausted and ready to leave when they saw the My Bud Vase™ set up and for the first time that day they didn’t feel scared. They were practically in tears when they asked to use the bud vase and felt comfortable doing so because it was so unthreatening. The women asked to be taught, and they were able to learn how to smoke for the very first time in their lives. They were introduced to cannabis in a friendly and familiar way that was a blessing that finally worked for them and instantly seemed to be less stigmatizing. Now they not only know how to smoke, but have a beautiful piece to do it with.

The My Bud Vase™ philosophy makes sense. Psychedelic head shop style paraphernalia has for a long time been considered standard gear when it came to cannabis. Many of the changes in choice we’ve seen integrated into consuming are often inspired by technological advances or some other factors. Using concentrates, vaporizers, cartridges, dab rigs, silicone, or other modernized methods might be somewhat safer, sleeker or simpler but they might not do a lot to alleviate the apprehension felt by someone who is genuinely frightened to try them. It’s easy to see why these eye catching artisanal goods are catching on as quickly as they have been.

The materials used to construct the vase bongs are most often antique pieces and sourcing them requires some archeology style skills in order to find the right items shoe can recycle and repurpose. The pieces are made of ceramic, glass, or cut crystal and are customized and transformed into beautiful new smoking devices – “it’s a labor of love, form, functionality and flowers.” The process isn’t so easy but it’s very rewarding. Once the stem and clear glass bowl has been added and a new piece is constructed, cleaned and the finishing touches have been put on – then it’s ready to be named. Choosing the name to title a piece can come about in a variety of ways. Doreen likes using her imagination and is inspired by many things: women, iconic heroes, the geographic locations and places of origin where she finds the pieces, legends, myths, and fables or something else that gives a deep meaning to an object. Other times it’s a more playful process and the name simply comes from the color, shape or some other visual fun clue. Example names of My Bud Vase™ bongs include: Belle, Bev, Blue Dream, Hercules, Tiger’s Eye and Unicorn. Some pieces look like they belong at a high tea while others look like they might contain a wish granting Genie inside. Orders can be customized for the consumer too and the vases are carried in different kinds of retail locations like smoke shops, dispensaries, collectives and holistic massage centers as well as in online stores. They recently were at The Cannabis Wedding Expo in San Francisco where My Bud Vase™ was received very well. The aesthetic is always elegant and artistic so it’s easy to see how these gorgeous products could be incorporated into cannabis weddings.

The 4/20 Holiday of 2017 was the one year anniversary of My Bud Vase™ being released to the public. After one year things are going incredibly well and it looks like the future is only going to get brighter for this innovative and imaginative young company. Beautiful bongs that are functioning glass or ceramic antique vases are a perfect method of introduction for those individuals who feel reluctant to use cannabis but can certainly be used, appreciated and adored by anyone who smokes cannabis. We had an amazing time shooting the photos with Doreen at Venice Beach using her pieces and fresh cut stems and buds of Tangie Sativa flowers provided by 3C Farms and Cannabal City Collective. She surprised the staff of Edibles List at by generously gifting the lovely light blue, Greek style “Hercules” bong to us at the end of the day when we had finished filming. Now that we’ve got a My Bud Vase™ bong of our own, I can tell you with total certainty that it elevates the experience and classes up the cannabis. Get one and see for yourself, you’ll be ever so glad you did. Check them out at:
www.mybudvase.com