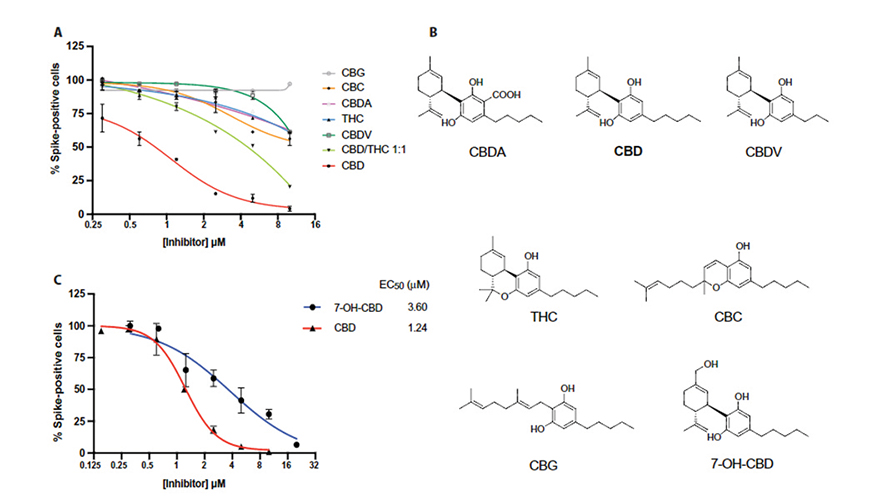 A new study published in January 2022 has found that CBD, when taken the right way and in the right amounts, may be able to lessen the severity of COVID-19 in addition to preventing the virus’s spread.

The new evidence is based on a study conducted on human cells, not mice. Further anecdotal evidence shows that people who were prescribed regular high-potency doses of pharmaceutical-grade CBD were less likely to contract COVID. The study was published in the journal Science Advances.

The study notates, “CBD could be acting by blocking viral entry to host cells or at later steps following infection.”

“Our research suggests that CBD and its metabolite 7-OH-CBD,” which is a compound produced after the body processes CBD, “can block SARS-Cov-2 infection at early and even later stages of infection,” researchers wrote, led by academics at the University of Chicago.

They also found that cannibidiolic acid—or CBD-A, the precursor molecule to CBD, as well as other similar cannabis acids convert to cannabinoids when decarboxylated (heated)—prevented the entry of the coronavirus into isolated human cells.

Authorities don’t want you taking over-the-counter CBD drops believing it is a useful tool against COVID. They also don’t want you to use CBD as a substitute for getting vaccinated. The general authority conclusion is that these findings may mean that cannabis-derived medicines or preparations might supplement vaccines in the struggle to end the nearly two-year-long COVID-19 pandemic.  Researchers stress that what it does not mean is that smoking a joint treats COVID.

In interviews, researchers highlighted both the significance of their work as well as its limitations.

“As a bottom line, what this says is that CBD has the potential to prevent infections, such as breakthrough infections, which might be one of the most useful applications,” as Marsha Rosner said, a professor of cancer research at the University of Chicago and a lead study author.

The findings were limited to just CBD—and just to certain high-grade CBD preparations that deliver a very large dose of the compound.

Rosner and her colleagues treated human lung cells with CBD prior to infecting them with the SARS-CoV-2 virus. They discovered “CBD potently inhibited viral replication under non-toxic conditions,” adding that other cannabinoids, including psychoactive THC, did not do this.

“Remarkably,” they wrote, “only CBD was a potent agent.”

The cannabinoid appears to activate a cellular stress response normally triggered in the presence of “viruses or other pathogens,” as Rosner said. This stress response produces a series of proteins called interferons.

“CBD induces the production of interferons, and they are the antivirals that will fight the virus,” Rosner said.

They also discovered that CBD oil also prevented the virus from making other changes to infected host cells.

However cells are not living beings. To test the findings on living beings, female mice were given two loads of CBD: 20 or 80 mg per kilogram of body weight.

That is a fairly substantial dose that could be exorbitantly expensive: A 150-pound person would have to take a heroic 5,440 milligrams of CBD to match the mice—and some companies sell 10,000 milligrams, or less than two doses, for $250. Some will argue that’s money and CBD well spent.

According to the researchers, mice that took 80 milligrams of CBD per kilo of weight saw decreases of viral loads in the lungs and the nose up to “40- and 4.8-fold.” There is evidence that these studies will translate to humans.

Epidiolex is a CBD-based pharmaceutical drug approved for prescription by the federal Food and Drug Administration for patients with severe seizure disorders.

A review of 1,212 patients in a dataset called the National COVID Cohort Collaborative revealed showed that the COVID infection rate among people with a “medication record” of taking pharmaceutical-grade CBD was 6.2 percent, compared to 8.9 percent for people not taking CBD, the researchers wrote.

Even more remarkable, CBD’s preventative potential was even more pronounced for people who took CBD the same day as their COVID-19 tests. For a subset of 531 patients “who were likely taking” 100 milligrams of CBD, their positivity rate was 4.9 percent, compared to a rate of 9 percent among a control group not taking the drug.

Rosner and her colleagues are hoping that clinical trials with humans can begin soon, as the pandemic grinds on through historic-high levels of infections and hospitalizations, a dreadful winter spike fueled by the omicron variant.

“We are very eager to see some clinical trials on this subject get off the ground,” Rosner told the University of Chicago’s news service.

“Especially as we are seeing that the pandemic is still nowhere near the end,” she added, “determining whether this generally safe, well-tolerated, and non-psychoactive cannabinoid might have anti-viral effects against COVID-19 is of critical importance.”

Link to the Original Study: