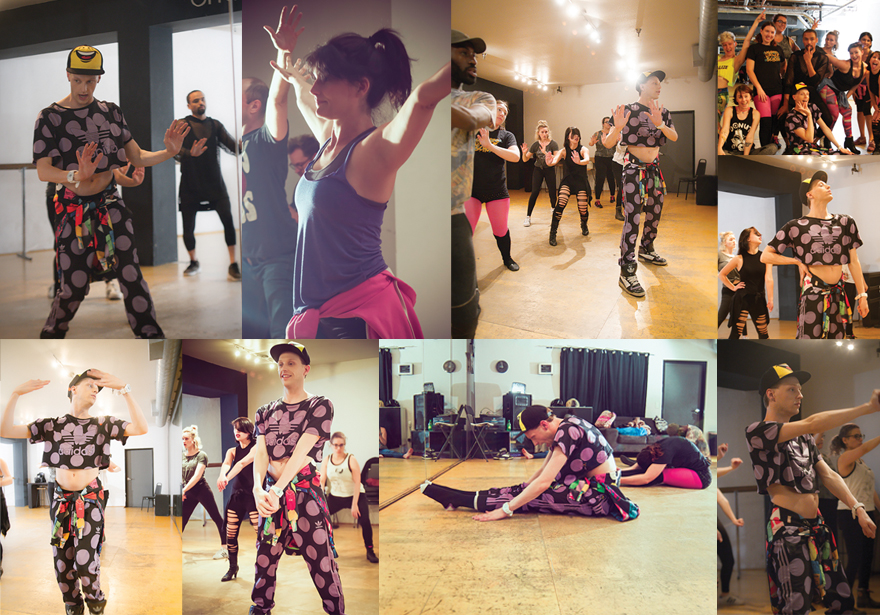 Monday night. 8:30pm. Time. To. Boogie. I showed up for LaGanja Estranja’s dance class at Basement of NoHo early and quickly spotted her picking up a pair of wigs from a fellow performer on the street. They hugged goodbye as I got out of my car and LaGanja trotted away around a corner in a midriff-bearing track suit and hat with a jacket tied around her waist. I followed her through an alley and down a flight of stairs into Basement of NoHo where she teaches a weekly dance class for LaGanja’s Dance School.

The crowd was super diverse, with outfits ranging from shredded leggings and heels to low key sweatpants and kicks. As we waited in the lobby for the class ahead of us to get out, I walked up to LaGanja who was perched on the armrest of a faded leather couch, a wig in each hand and introduced myself.

“Nice to meet you, I’m Jay,” she said smiling. “I love your little mason jar moment,” she added, pointing to my water bottle, which was, indeed, a mason jar with a lid and a straw.

The vibe in the lobby was across the board friendly—strangers weren’t as shy to introduce themselves or jump into a conversation if they felt they had something to add, and regulars greeted Jay with an enthusiastic hug. Not a bad way to start a dance class, if you ask me. Fear of embarrassment: minimized.

The classroom, itself, felt more like a living room than an aerobics class with low lights

and a laid back energy all around. LaGanja started the class by announcing that she wouldn’t be wearing heels tonight because she is starting a second “Introduction to heels” class downtown, so this would be more about dancing and choreography while the other class would focus more on technique in heels. Then she added, “My feet hurt today. I’m not wearing heels,” and slipped on a pair of high tops.

We started with deep, dynamic stretching, somewhere in between a follow-along modern dance and yoga. It was a longer stretch than I was expecting, and I was pleased towards the end when we got deep into our “death drop” muscles around our hip joints. Despite the class having a very “chill” feel overall, the stretch was challenging and fun, taking on an almost meditative quality at times. LaGanja gave instructions in a loud but mellow voice, less about the cardio and more about the flow.

After thirty or so minutes of moving our bodies, we started in on choreography, learning the first minute or so of a number Laganja was going to Peru to perform the next day. The choreography was quintessentially her, with arched back ribcage pops and a drop-it-down-low within the first 8 beats.

Kristen Lovell, LaGanja’s business partner, recorded the class faithfully for social media, and even though I didn’t make the final Instagram cut—they divided the room into two performance groups and then a final all-star hybrid group for the final performance – I was definitely happy to have gotten down with my inner-body roll.