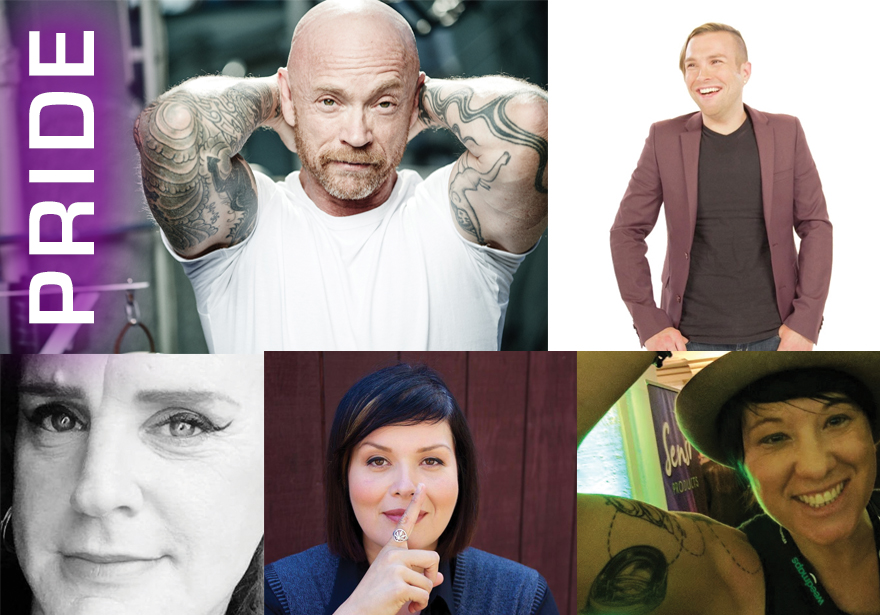 we come celebrate LGBTQ Awareness month as Pride Festivals dance across the county. Here within our cannabis community we are fortunate and honored to have some the most passionate individuals focused on growth, education and patient stories. Oh yes, and they just happen to also be members of the LGBTQ Community. At this time we here at The Edibles List would like to highlight some of our “LGBTQ Shining Cannabis Stars” to honor LGBTQ Awareness month.

Josh also started iCanna, which is a non-profit, 501(c)3 organization and is comprised of affiliates including cannabis industry insiders, scientists, medical doctors and policy makers. The members work to share insights and advance solutions to improve cannabis analytical testing technologies. His friendly demeanor has the industry leaders clamoring to work with him on his Cannabis Science Conference.

Felicia Carbajal – Activist
Felicia is a long time cannabis patient, activist and community organizer in both the LGBTQ and cannabis communities. She has worked for the Courage Campaign; an organization fighting for a more progressive California in the aftermath of Prop 8. During that time she recognized some similarities between the cannabis and LGBTQ communities. Felicia works with countless California patients, caregivers, dispensaries, brands and cannabis industry investors to find the best methods to ensure patients get knowledgeable information, quality medicine, and that compassion remains in California Compassionate Use Act.

In 2013 she was honored by being named one of The Advocate Magazine’s 40 under 40 LGBT leaders for her work in Cannabis.

Buck Angel
Founder Pride Cannabis
Buck Angel’s message of empowerment through self-acceptance and the mission to encourage everyone to be comfortable in their own skin – whatever that means to them – has struck a passionate chord with people around the world. As he demonstrated in his appearances at YALE, Cornell and many other Universities around the world, Buck is not only inspiring people to think outside the box, he is re-defining gender and educating an entire generation on the fluidity of sexuality and identity politics. Since Buck coined the phrase ” it’s not what’s between your legs that defines you!”, the term has become an anthem for men and women everywhere who have been inspired by this message of self-acceptance

“Mr. Angel”, Buck’s documentary about his life and transition from female to male has become a big hit on Netflix and has helped to inspire and educate many on the struggles of being a transsexual person. Buck continues to be a big influence and sought after speaker worldwide. He travels the world spreading his message of self-love, compassion and how to live authentically in your own body. Buck is a believer of learning to love you through transition.

Renee Melodie Gagnon
CEO Hollyweed North
Renee has been fortunate enough to be at the beginning of several major trends and market creations. Throughout her career, detecting and then capitalizing on change has been her focus. She is a serial startup founder, skilled at survival, stress and team building.
She is also both the first Transgender Publicly traded marijuana company CEO and the first female one – Thunderbird Biomedical Inc. (now EMH.v) was the 5th licensed Federally sanctioned Medical Marijuana company in Canada (and one of handful on planet). Renee built the core team, created and executed on the business plan and raised 3.7 million dollars in funding, then took the company public ($25M Valuation at IPO)… She used this insight to create a diverse workforce with strong female leadership across the HollyWeed North Cannabis Inc. organization.

After exiting Thunderbird Biomedical Inc. in Jan 2015 as founding CEO and Board member, she has chosen to focus on US based infrastructure and supply delivery for the Cannabis Industry. Catch her on the cover of DOPE magazine in June.

Meghan Hall
Producer, Director: Master Grower
Meghan Hall Is a Los Angeles based Television Producer with over five years’ experience supervising and producing various award winning Doc-Reality shows. Meghan has worked on hit series such as Deadliest Catch (Discovery Channel), Ice Road Truckers (History Channel), Bering Sea Gold (Discovery Channel), Black Gold (Tru TV), Game of Arms (AMC), & Airplane Repo (Discovery Channel) just to name a few. A big believer in capturing real life stories, Meghan supports unique ideas, pushing boundaries, and developing show concepts that highlight the integrity of our generation. Passionate about the legalization of cannabis, investing in the industry, and recognizing its overall possibilities, Meghan has spent two years developing a new Doc-Reality Series (working title: ‘Master Grower’) that she plans on pitching to top rated networks. This series will embrace the rise of the cannabis industry, the growers who are pioneering their way into a new canna-culture generation, and ultimately bring awareness & showcase the craft of what it takes to become a Master Grower.

These are the Shining LGBTQ Stars of the Cannabis Community! On a personal note: When I was much younger I wasn’t seeking to find a man, fall in love and get married, but I did feel that if it that was my destiny to be married I should have standards. I prayed that this person be spiritual, kind, caring, intelligent, have goals, funny, vegetarian, 420 friendly, no alcohol and no cigarette smoking. Oh my goodness, we found each other in Santa Cruz and he was all those things – But next time I’ll remember to pray that they be heterosexual! We did two things right: we loved each other and we had a son, and even though divorce came our way – I was lucky I married a gay man as he is the best father my son could ever hope for and the experience made me a better woman! My former spouse is still spiritual, kind, intelligent, caring, tries to be funny, and looks like a combination of Richard Gere and Anderson Cooper and he still honors me.

So let us celebrate diversity every day, for all of us to be inclusive and have equal balance of mind and spirit to the LGBTQ community. May we continue to assist each other and to shine on and find the light within cannabis lifestyle.