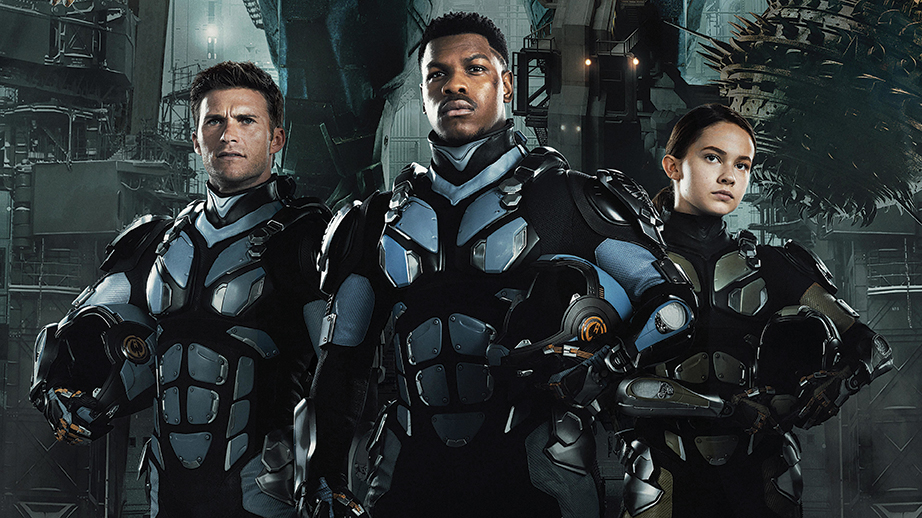 Pacific Rim: Uprising is a PG-13 sequel that has everything a fourteen year old Chinese boy wants in a movie. Robots, monsters, robot monsters and Clint Eastwood Jr. (Scott Eastwood). I love this movie if only because it crushes the diversity barrier in the East. I never thought I would see a movie obviously targeting the Asian youth demographic starring a black guy. Not an African American. He’s African European. John Boyega crushes it doing what he does best…being British. Is Uprising the sequel to Pacific Rim or is Attack the Block the prequel? And if you’ve never seen John B. in the classic British sci-fi movie Attack the Block, watch it before you watch Pacific Rim 2. Boyega is channeling all the charm he’s mastered from the Star Wars films, but I would advise him to lay of the chocolate sprinkles. There is a lot of junk in the trunk of that Jaeger. Piloting a giant robot is a lot like working a digital elliptical trainer and Boyega does a lot of running and never has to catch his breath. Get back on the treadmill Johnny, because your boyfriend makes you look kinda fat. Did I say boyfriend? Am I suggesting there was some sexual tension between Scott Eastwood and John Boyega? Yeah. That’s right. I said it! Pacific Rim 2 is gay. It’s as gay as Top Gun. Like most military propaganda movies there is always a hidden homosexual overtone that makes the film more enticing. The gay romance is one of the best things about Top Gun and if you haven’t watched it, watch it before you watch Pacific Rim 2. In this Pacific Rim there is no Uprising, especially not in my pants. Like all Chinese state approved cinema this movie is devoid of any sex or romance. The only real lust in the film is a forced love triangle between the two leading men and another female character. Boyega and Eastwood have great chemistry except for the two times that Eastwood calls Boyega “brother.” The second time I could of swore he said “brotha.” It sounds weird. Most sequels are not better than the original, but this sequel is at least only slightly sub par than the original.

The first Pacific Rim was far from perfect and strangely the sequel has a lot of the same problems. Lack of romance. The final battle is the weakest battle and the supporting cast often steals the scene from the lead actors. But I watched Pacific Rim 2 with a killer Indica that made the whole experience feel like a video game worth playing. If you are a big fan of Macross, Voltron or Ultraman, 2. etc…you can probably forgive this movie’s flaws and just enjoy watching the giant action figures at play. If you don’t know any of these references I mentioned, this may not be the movie for you. If you’re real nerd you may even spot the Mobile Suit Gundam homage. And of course the best thing about Pacific Rim 2 is the attempt to capture the Guillermo Del Toro production design. Why do monsters look cooler at night in the rain? Del Toro has definitely seen the Original Godzilla of 1954. If you haven’t seen Godzilla, watch it before you watch Pacific Rim 3. Yeah. That’s right. I said Pacific Rim Part three! Because you know there will be one.

DJ Reid 420 is a Hollywood based writer and comedian. He’s also the creator of Black Spider-Man, the “Web” series. www.blackspiderman.net